A Succour To Shani Dosha, Removes Black Magic Effects & Gives Professional Stability
Scheduled LIVE on October 30, 2017  6 PM IST
This event has been completed.
Kindly visit this link to perform individual Maha Kali Homam
http://www.vedicfolks.com/entrepreneurship/karma-remedies/homams/mahakali-homa-let-the-goddess-of-goodness-raze-away-your-badness.html
Vedicfolks is performing Maha Kali Mahavidya Maha Yagya – Navayoni  Chakra and  Saturn invocation on the most auspicious day of Dasami. Kali is the first and foremost among the Maha Vidya. She is the symbol of eternal time, presiding over all stages of life. Maha Kali will strengthen Saturn which pacifies Shani dev and neutralizes its malefic effects. She can bring you ultimate wealth gain and protect you from evil powers.
Kundalini Awakening: This Mahayagya Opens your Navayoni Chakra
Vedic Astrology: Saturn will be strengthened in the horoscope which brings success in business, gives you authority, integrity, wisdom and eradicates loans and debts. It removes serious health ailments and gives protection from evil forces.
Maha Kali is the dominating energy that prevails in every moment of your life. She has the power to rule your inner consciousness. Maha Kali puja combats the effect of Black Magic, gets rid of evil eye, and brings success in professional and personal life.  This homa also protects from the unsustainable malefic effects of Shani or Saturn.
Goddess Maha Kali Makes Your Time Favourable
Maha kali is the consort of Lord Shiva; her name means time. She has the power to control time and she is responsible for bringing favorable time to her devotees. Goddess kali has three eyes and a red face with a protruding tongue. She wears a garland made of human heads. She has a satisfied expression with disheveled hair. She looks terrible and is called the daughter of Himalayas.
She is said to be the personification of Wrath for she has found major successes in war. Her hands indicate assurance and granting power. She is disorderly and is also considered as Parvathi’s dark, violent side. Thus she is known for blessing her devotees with strength and courage.

This Homam combats the effects of sorcery, and removes fear. Maha Kali brings peace and happiness in the family. By offering homa to Maha Kali one can remove distress, and the evil forces around you and your family. One can attain victory in business and public life by performing this homa. This homa replaces the fear and sorrow in your life with courage and happiness.
Performing this homa will fulfill all your desires and problems related to delayed marriage and infertility. This homa will elevate an individual’s position in the society. It will also ensure professional and health stability. This homa will make you more strong and victorious and you will become the reflection of Kali’s ferociousness and determination.
The rituals of Maha Kali involve a series of powerful pujas, japas and homas to achieve its full potential:
• Shaneeshwara Shanti Puja – It helps those under the bad influence of planet Saturn, one of the most influential planets that provides fortune according to one’s karma.
• Vakra Kali Puja – Remove evil and all negative effects
• Mahakali Beejakshara Puja – Find solution to serious problems & all round progress
• Durga Suktha Parayanam – Dispels fears, results in valour and vitality
• Mahakali Moola Mantra Japam – Provides immediate relief from agony, mitigates evil effects of Saturn
Badrakali Yantra Puja
Rids you of all difficulties, overpowers enemies and provides you with all that you desire.
It bestows wealth and prosperity and protects you from all dangers.
Navayoni Chakra Puja
The Sri Chakra is an amalgamation of nine triangles called Navayoni which represents the union of male and female energies. The chanting of mantras during the rituals agitates or awakens the Kundalini that zigzags up the body thereby opening the Navayoni chakra, situated above the Bindu chakra. The physical representation of Navayoni is the Sri Yantra which has the nine triangles. The opening of Navayoni chakra brings the powers of both Shiva and Shakti and relates to the worshipping of ultimate force in the mystical form. It also leads to Supreme Knowledge and Enlightenment.
Benefits of performing Maha Kali Rituals
• Brings Success, peace, prosperity in life
• Removes hindrances on the path of your success
• Prevents loss in Business and personal life
• Brings Financial stability
• Retains the peace at home
• Protects from evil forces, and sorcery
• Enhances fast recovery from illness
• Gives improvement in education
• Clears defamation due to unknown factors
Watch your Homam on LIVE VF TV clicking on the link below after booking your schedule 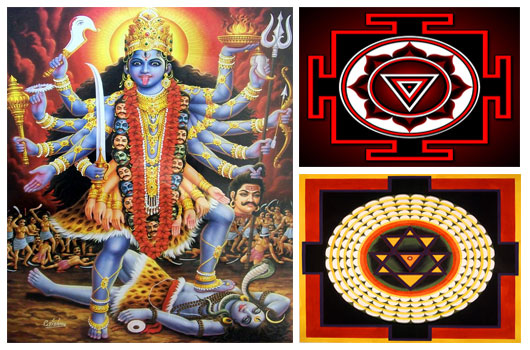 Maha Kali Homam Grants Success, Courage, Happiness and Pins Down Evil Forces
Badrakali Yantra Puja Rids you of all difficulties, overpowers enemies and provides you with all that you desire.
Navayoni Chakra Puja Brings Supreme Knowledge and Enlightenment.
Add To Cart 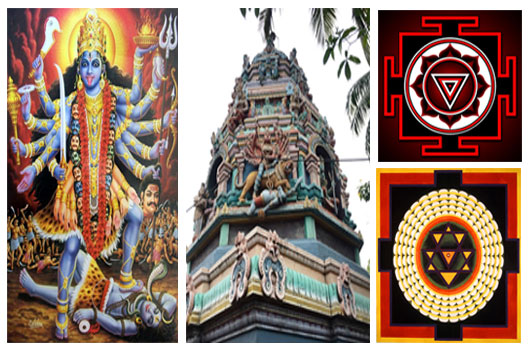 Maha Kali Homam Grants Success, Courage, Happiness and Pins Down Evil Forces
Badrakali Yantra Puja Rids you of all difficulties, overpowers enemies and provides you with all that you desire.
Navayoni Chakra Puja Brings Supreme Knowledge and Enlightenment.
Arulmigu Mahakali Amman Temple Puja Retains the peace at home and protects from evil forces, and sorcery
Add To Cart

Maha Kali Homam Grants Success, Courage, Happiness and Pins Down Evil Forces
Badrakali Yantra Puja Rids you of all difficulties, overpowers enemies and provides you with all that you desire.
Navayoni Chakra Puja Brings Supreme Knowledge and Enlightenment.
Arulmigu Mahakali Amman Temple Puja Retains the peace at home and protects from evil forces, and sorcery
Energised Kali Yantra helps destroying  the evil forces and fighting against enemies effectively to live a protected life.
Add To Cart