This event has been completed.
Please visit this link to perform individual Katyayani Homam.
https://www.vedicfolks.com/relationship/karma-remedies/homams/katyayani-homa-get-to-ring-your-wedding-bells.html

Jyeshta Purnima is considered very significant for its multiple auspiciousness. The day is associated with Savitri, who used her wisdom to get back the life of her dead husband from Yama. It is the hottest time of the year as devotees leave for Amarnath Yatra carrying a small pot of Ganga water with them. It’s a day of blessings to married women for a blissful life and longevity of their spouses. The day grants mental peace and physical well-being besides assures prosperity, happiness and success for all. Goddess Durga and her forms have activated powers on full moon days or Pournami and that’s why it becomes necessary to worship her during Kali Yuga to suppress all evil effects, planetary doshas, health problems, sudden deaths etc.

When calamity strikes, when there’s de-stability all round and when people suffer, godheads appear like a flash of lightening to reinstall peace and tranquility and uphold justice. Goddess Katyayani, an Adi Shakti form manifested as the sixth form of Goddess Durga for removing fears and wiping tears. She was born in the household of Sage Katyayana who undertook severe penance for ending the reign of terror of demons, to destroy them completely and establish righteousness. She dazzles in her appearance and blesses one with success and enhances the people’s intellect and skills. She also removes sorrows, obstacles, illnesses and guilt.

According to scriptures, the Gopikas of Brindavan performed rituals to Goddess Katyayani for attaining Lord Krishna as their companion. She graced them and fulfilled their wish, and even to this day, the entire place is filled with glory, divinity and joy of her manifestation.


Great epics like the Markandeya Purana and Durga Saptashati, have mentioned the appearance of Devi Katyayani. She is a very compassionate mother and provider of boons. By sincere, devoted worship, the goddess bestows peace, good luck, prosperity and health. She is equipped with special powers to destroy malevolence, and grants immense strength at the physical level too. The specialty of her invigoration benefits young unmarried girls with wedding bliss that transforms them into good housewives. Devotees also beget good progeny blessings. All her devotes including men can beget a good spouse through the devotion of this powerful force. Also, monetary and social aspects are improved with her worship.

Katyayani Maha Homam is highly recommended for those who wish to get an ideal partner. It’s the perfect choice for girls with Mars dosha or mangalya dosha in their birth chart and are unable to get married at the right age and time. The homa prevents obstacles in marriage, ensures a settled life, and also helps cross the boundaries of hardships. It also solves marital problems and improves relationship with your spouse. The homa reduces the malevolence caused by planets and foes. The homa provides security if there’s a threat to your life, protects from jealous people and all forms of negativity. Experience divine miraculous vibrations of the mother that awakens your mental and spiritual state. 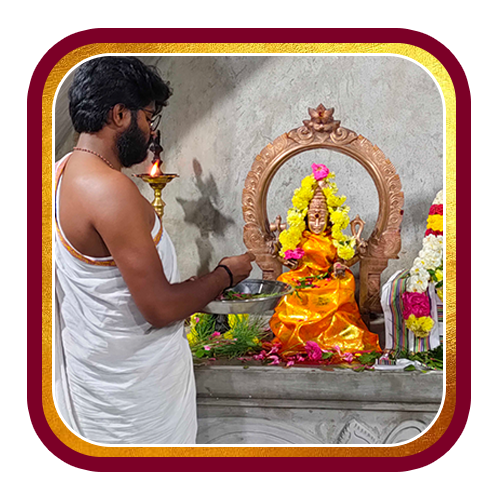 Swayamvara Parvati is the bridal form of Goddess Parvati, the consort of Lord Shiva. This is a very enchanting form as it represents the state of the goddess’ lifetime longing, of marriage to Lord Shiva, coming to a conclusion. By performing rituals in the name of Lord Shiva and Goddess Parvati, the puja removes all barriers and the goddess symbolises good qualities associated with a wife.
Swayamvara Parvati puja is an added advantage for finding suitable groom or bride for those whose marriage is delayed or postponed. It helps beget a good life partner. It helps overcome obstacles, delay in marriage and also clears relationship issues after marriage. It ensures peace and harmony in married life by clearing misunderstandings and strengthening bond between you and spouse. 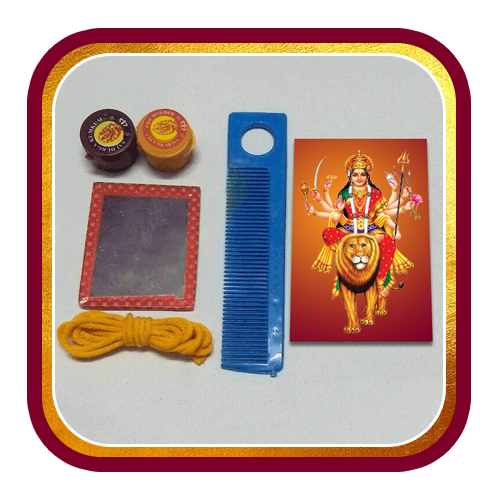 The mangalya set comprises a turmeric covered thread, that’s the symbol of married south Indian women that will be energized in the Katyayani Maha Homa. It will also consist of turmeric and vermillion packets and turmeric roots grant sowbhagya or auspiciousness. The thread can also be used to for garlanding goddess’ figurine or photos in your puja altar and worshipped every day for long life of your husbands. For the unmarried, it can usher in marriage blessings. The mirror, comb and the photo could add charm to your already existing possessions.