This event has been completed.

The eight forms of Mother Shakti – the Ashta Matrikas or warrior goddesses were created by Lord Shiva to fight demons. They guard the eight cardinal directions of the universe, they protect and defend evil from all sides with great valor and ferocity. They also represent man’s inner evil or negative qualities that need to be rooted out for attaining enlightenment and moksha. Vedicfolks Ashta Matrika Homam aims to achieve this objective on the day of Durgashtami, and a powerful prayer to Lord Rama on Tulsidas Jayanthi is also slated for the day. The rituals also enhance positive energies by fighting the evil forces and ensure that your resources are replenished forever.

The Ashta Matrika are incarnations of Goddess Shakti and manifested from the male gods to fight demons. Hence they are warrior deities having auspicious qualities. They were created to kill Andhaka whose every drop of blood gave birth to a new demon.


The Ashta Matrika portray an interesting symbolism. Lord Shiva represents vidya or knowledge. The demon Andakasura represents avidya or ignorance. The more vidya becomes powerful avidya also arises and multiplies. This is denoted by the massive increase in the demon and other asuras. The eight evil qualities like lobha (greed), moha (illusion), madha (pride), krodha (anger), paisunya (wicked), matsarya (miserly), kama (lust), and asuya (jealousy) need to be overcome and brought under the control of vidya. Only then Andaka can be defeated and kept under restraint. According to Varaha Purana, the matrikas are atma vidya battling against Andhakasura, who represents evil or darkness.

Invoking the Ashta Matrika or the eight forms of Devi that possess the supreme and unique powers, shield the devotees from negativity and evil powers. 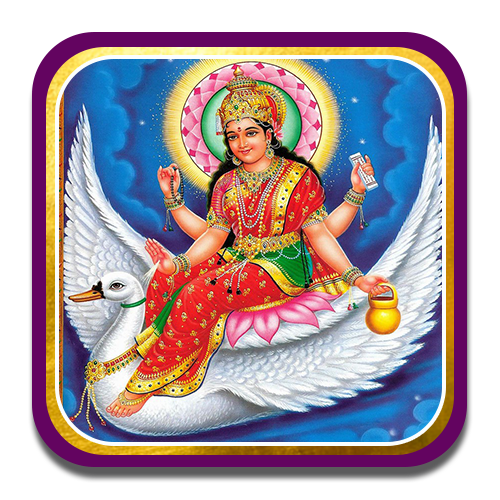 Brahmani – She evolved from Lord Brahma and is seated on lotus. Brahmani Homam helps to achieve mental peace by avoiding stress. 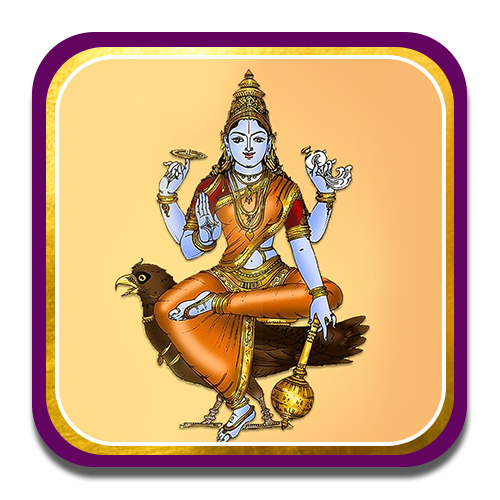 Vaishnavi – She was created by Vishnu, depicts all qualities of Vishnu with his mount and weapons. Vaishnavi homam grants relief from all sorts of dangers and frequent mishaps in life. 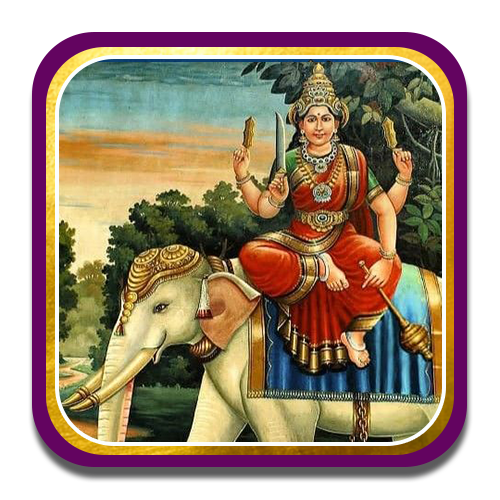 Indrani – She is seated on an elephant and blesses her devotees with complete joy in life. 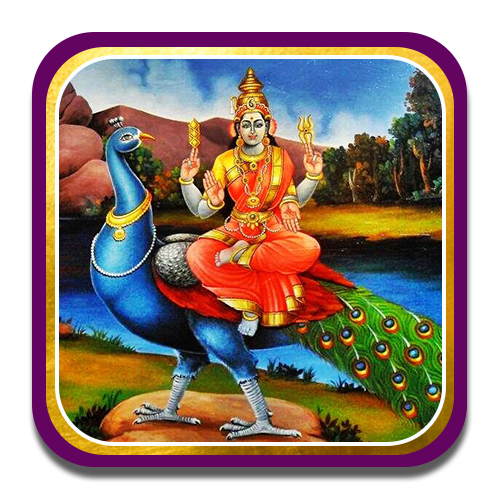 Kaumari – She is the power of Kumara or Muruga, the God of War. Goddess Kaumari when invoked grants blessings of power to overcome struggles and to get relief from heat - related health disorders. 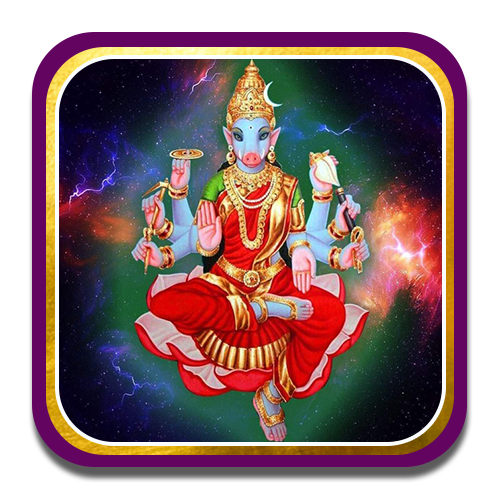 Varahi – She is the feminine energy of Varaha, an incarnation of Lord Vishnu. Goddess Varahi wards away evil eye casting, black magic, all negative energies and misfortunes in life. 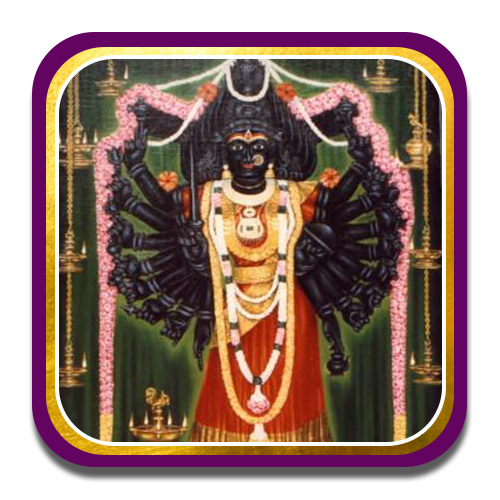 Chamundi – She emerged from Devi or Chandi. Her ritual bestows a person with power and supremacy to achieve all endeavours with success. 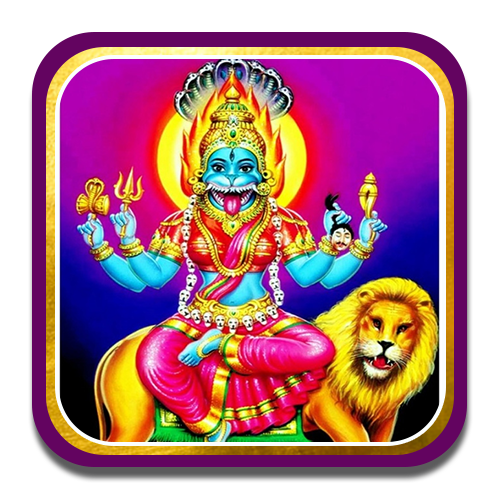 The main and common benefit of performing Ashta Matrika Maha yagya is that the devotees will get blessings from all eight divine goddess and also stay blessed with various boons in life to overcome struggles and get relief from all types of evil effects. This also means that you’re blessed with ashta aishwaryam or eight-fold prosperities. The eight-fold prosperities are dhanam (wealth), dhanyam (foodgrains), santanam (children), jaya (victory), dhairya (courage), ayudha bala (intelligence and ability to make wealth), rajyam (kingdom) and vahanam (vehicles). It provides relief from skin and heat - related health disorders like vitiligo, chicken pox, etc. The ashta matrika homam gives you power, courage and supremacy to achieve all your goals with ease and keeps you protected from dangers of life. It removes avidya or ignorance, enlightens you and ensures peace, harmony and positivity. It also pleases male godheads Brahma, Vishnu, Shiva, Skanda & Indra. 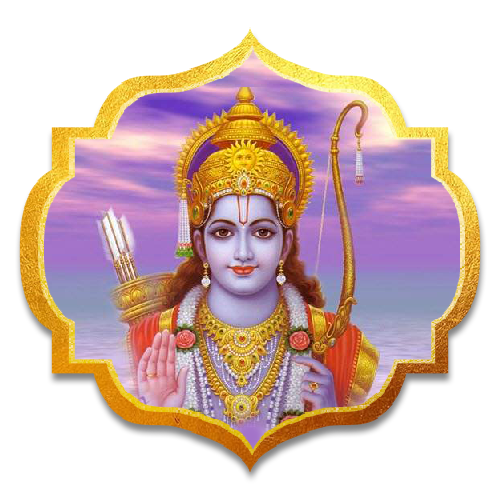 Lord Rama is the seventh avatar of Sri Maha Vishnu. He descended on earth to kill Ravana and rescue Mother Sita. He is marayada purushotam the perfect soul whose qualities are exemplary and highly remarkable. Lord Rama symbolises virtuousness and a steadfast adherence to dharma or correct action. A puja to this supreme incarnation satisfies all wishes and desires. It grants liberation or moksha.
Lord Rama’s invocation also instils confidence, will-power, power of right judgement, mental strength and clarity of thought. It removes afflictions or diseases, provides material benefits, overcomes debts and helps to gain financial stability. One also get the ability to get rid of vices and achieve all good virtues. 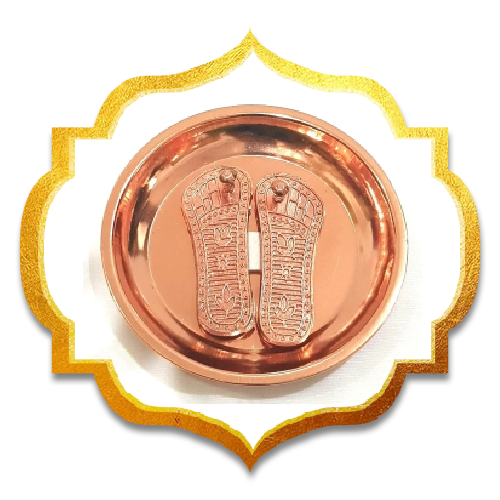 Lord Rama paduka is a gentle reminder of the sacrifice of Bharata who worshipped it every day in the place of his brother Rama, during the lord’s exile period of 14 years. It grants much peace and harmony.
Valmiki Ramayana says that the lotus feet of Sri Rama provides people with harmony and happiness. The worship of padukas with flowers gives you a life of fullness. These auspicious padukas rest on a copper plate and can be easily cleaned and polished. It can also be placed inside your vaults, puja spaces both at office or home for getting wealth and luxuries. It also ensures success and prosperity in business and personal ventures. It ensures the lord’s presence in your home and his divine feet are big steps to great future.