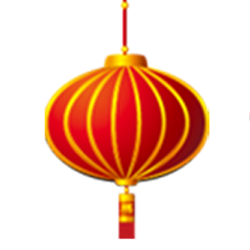 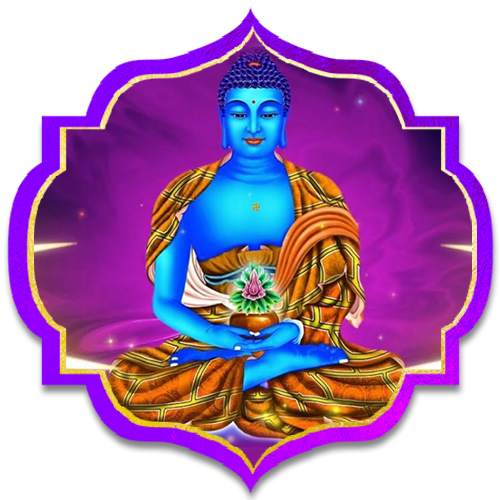 Bhaisajyaguru or healing Buddha is one of a set of eight healing Buddha which includes the historical Buddha, Shakyamuni. He is the leader of all the Buddhas and his name Bhaisajya denotes curativeness or having the efficacy of healing. Guru means teacher or master. Thus, this supreme physician is a master of healing or king of healing – Bhaisajyaraja. His complexion is blue and sometimes golden dressed in robes of a monk. His left hand rests in his lap in the meditation mudra, while in his right hand, palm held upwards at the right knee, he holds a branch of a healing plant. Buddhist doctors of Tibet depend on medicine Buddha as their patron in their healing practice. People of China and Japan seek refuge in Bhaisajyaguru in times of illness. He is called out by millions all over the world who recite his mantra for healing. It is said that when you utter his name in the ears of a dying animal or human, they will be ensured with good rebirth regardless of their past Karma.

Bhaisajyaguru Puja and Homam, and Avalokitesvara Mantra Japa and Homa will be performed on the auspicious day of Buddha Purnima, which is very significant as it was on this day that three very important events took place in the life of Buddha. His birth, his attaining enlightenment, and his death or Paranirvana happened on a full moon day. Therefore, revering the two important Bodhidsattvas on this day Bhaisajyaguru and Avalokitesvara confer the worshippers with three-fold blessings.

Meaning – I honor the lord master of healing, the king who has Lapis Lazuli radiance, the one thus-come, the worthy one, the fully and perfectly awakened one, thus: hail! O healer, O healer, O great healer, O king of healing. 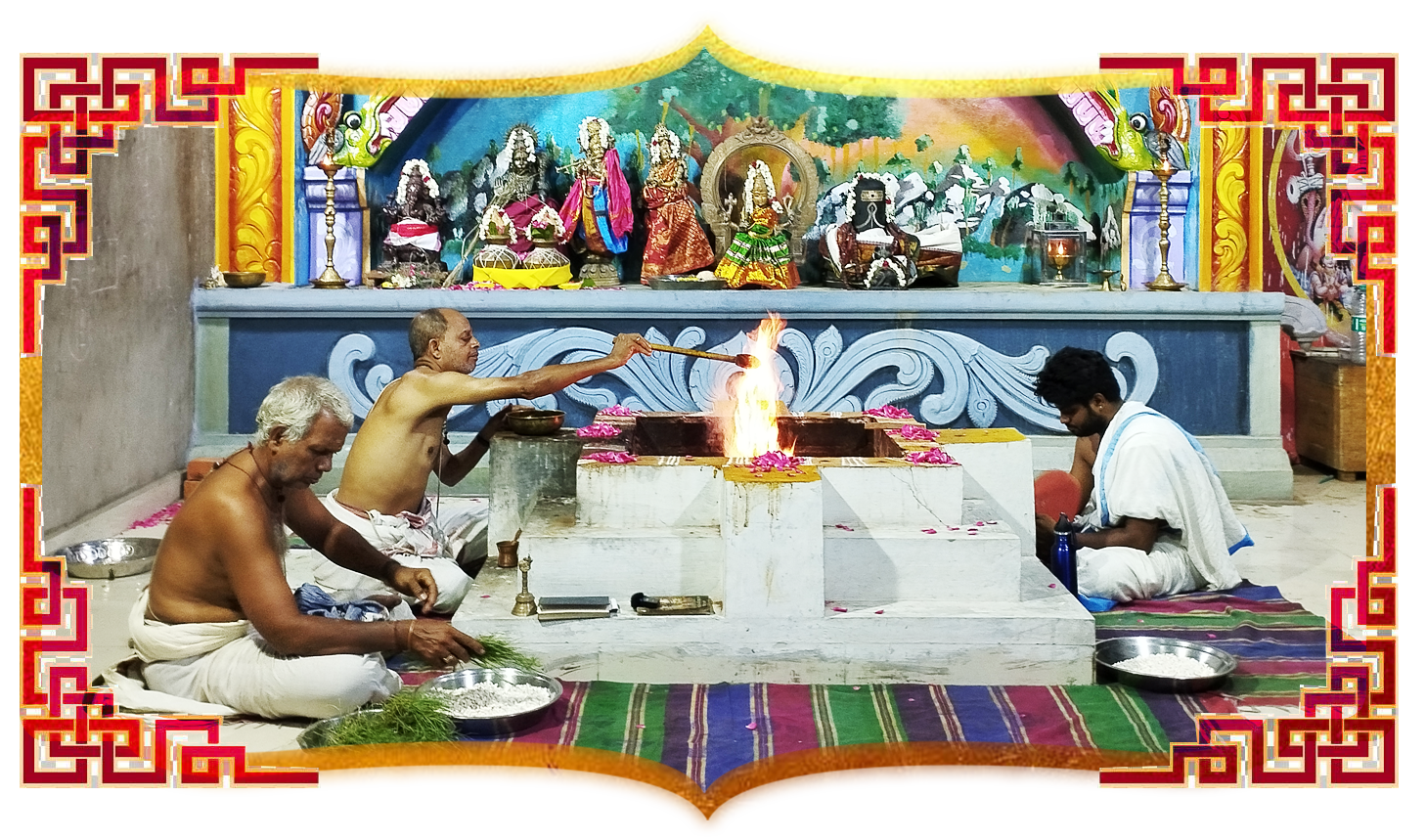 Bhaisajyaguru, the master of healing, is a benevolent one who comes to the rescue of all living beings who are struck with severe maladies and diseases. He especially helps to reduce inflammation or internal bleeding. He also neutralizes bad karma and eradicates its causes and symptoms that show up in people as sufferings and trauma. Worship of this great healer brings good fortune and leads one to the path of enlightenment. He provides sentient beings with material needs, and also liberates people from the clutches of demons and the bonds of exterior forces. He comes to the aid of those struck with poverty, without clothes, plagued by cold, heat and stinging insects with blessings of fine garments and peaceful living environments. He guides those walking on thorny paths to find the true path of great vehicle called Mahayana.

Benefits of Bhaisajyaguru Puja and Homam

Avalokitesvara the Compassionate Master Wipes the Tears of Suffering Humans

Avalokitesvara, finds mention in the lotus sutra of Mahayana Buddhism. Ava means down and Lokita denotes world, and Eshwara means lord or master. So the name Avalokiteshwara signifies the ‘lord who gazes down at the world’. He is a perfect example for Bodhisattva (the philosophy of Mahayana Buddhism where in a person who is able to reach nirvana delays it due to compassion for human suffering). The lord is born in heavenly realm from where he works untiringly to help and relieve the pain of people who look up to him. In Chinese, Japanese and Korean traditions, He is depicted as female while in others he is a graceful youth with a gentle disposition. The Tiantai School of Buddhism centered in Korea, China and Japan, Lord Avalokiteshwara is known for six forms and unique qualities namely, 1. Great compassion 2. Kindness 3. Universal light 4. Leader of human beings and devas 5. Great courage 6. Omniscient Brahman. He is also believed to live in six realms – pretas, hell-beings, animals, asuras, devas and humans.

In Tibetan Buddhism, Avalokiteshwara also known as Chenrezig, has seven forms – Hayagriva, Amoghapasa, Sahasrabhujalokeshvara, Chintamani, Cundi and Ekadashamukha. In this tradition, he is also brahma, who from the deva realms and the Indra, the king of gods who came to be known as Vajrapani. People of Sri Lanka worship him as Natha, in Burma He is Loknat, and in Thailand he is known as Lokeshvara. Lord Avalokiteshwara manifests when people undergo extreme sufferings and he appears immediately to wipe the tears of humans. The basic essence of Buddhism is to understand and transcend suffering.

Lord Buddha when asked the meaning of the name Avalokitesvara said that it is equal to sands of 62 Ganga rivers. Therefore a person gets that many merits by invoking this compassionate being.

Meaning – ‘Om’ is the primordial sound of all creation and can cleanse away pride. It also invokes the pure consciousness. Mani is the jewel that loosens our worldly attachments to desire and passion. Padme frees us from prejudices and judgmental notions within us. Padme also means lotus on which Avalokitesvara is seated and represents wisdom. Hum means our efforts to dissolve our attachments to aggression and hatred. It also means unshakeable or unmovable. On the whole, the mantra can be summed up as ‘The Jewel in the Lotus’ or ‘Praise to the Jewel in the Lotus’.

*Mahayana -- the word ‘yana’ denotes vehicle or raft and thus Mahayana which is a Buddhist tradition, is a great vehicle that helps one to cross the river of suffering. Boddhisattva is a great example who follow this path. 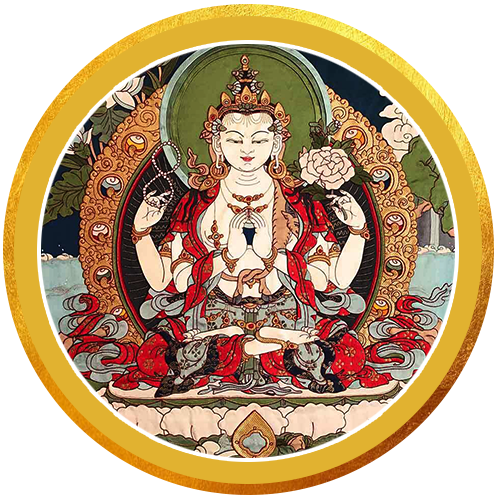 The very utterance of Avalokitesvara’s name is equal to the sands of 62 Ganga rivers. A ritual to this compassionate being purifies negativities and obscurations especially the five gravest non-virtuous actions in Buddhism – killing living beings, sexual misconduct, stealing, lying and intoxication. The master healer, Avalokitesvara removes six-root kleshas or afflictions—anger, ignorance, attachment, pride, doubt and wrong views. Also, there are fears arising out of the afflictions such as fear of death, fear for livelihood, fear of grief, fear of a bad destination and fear through timidity. All these negativities can be wiped out with this homa and mantra japa. Also, the ritual enhances certain qualities in a person such as generosity, morality, wisdom, patience, diligence and meditative concentration. It defeats foes and interferes, helps to subside sicknesses and malicious attacks, one also acquires siddhis, increase in life span and increase in food and wealth. 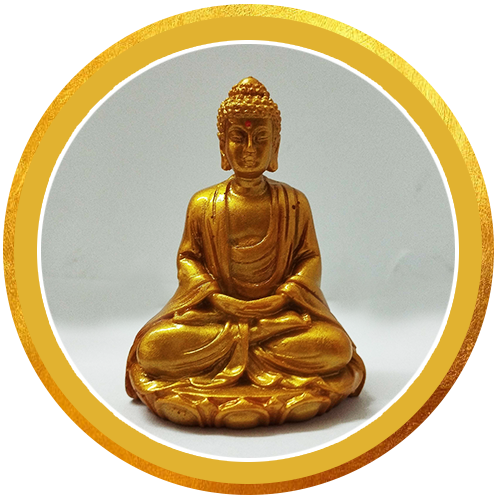 Gautam Buddha was a great enlightened master who was the founder of Buddhism. Buddha was the messenger of peace, fraternity and equality. The idol of Buddha is a symbol of enlightenment, balance and inner peace. Traditional practices that deal with living spaces like Vastu Shastra and Feng Shui believe that the Buddha idol invites auspiciousness and good fortune. Vastu experts suggest placing Buddha statues at different places in the house can have a positive influence on the psychological health and harmony. It not only enhances spirituality and harmony, but adds an aesthetic appeal when placed at right directions, and ensures prosperity, good health and peace.

Basic Package (For One Devotee) -