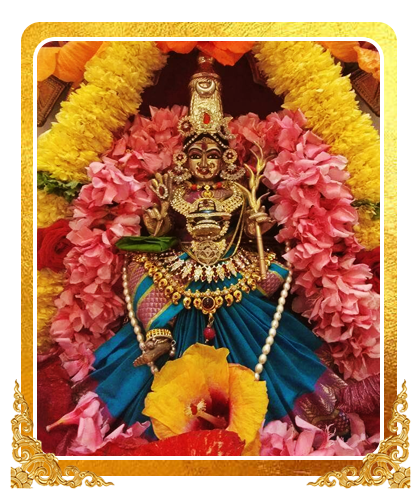 Soundarya Lahari is a profound and mystic heavenly prayer written by Adi Shankaracharya that gives a projection to Mother Lalitha Tripura Sundari as the one above all gods and celestial beings. The entire capsule of this divine depiction in the form of mantras is an ode to the generous mother who ensures your well-being. But the most essential variables are trust and faith. Soundarya Lahari incorporates innumerable tantra, mantra and Vedic information that are arranged like the petals of a flower in the Sanskrit poetic literature. It has a universal implication. Even a layman who is not a Vedic scholar can recite this complex prose without understanding its profound meaning. All the mantras that yield different benefits could be chanted anywhere, but with certain exceptions of restricted occasions, environmental factors or conditions. Reciting a particular verse enthusiastically multiple times and repeating the remainder of them in the mind would fetch the devotee the desired results. Soundarya Lahari provides an opportunity for the sadhaka, to develop a mental attitude through which total surrender and union with Devi are felt.

With the completion of verse 41, the spiritual bliss experienced with Ananda Lahari or first half comes to an end and second half or Soundarya Lahari begins, and the devotees can now be aware of her beauty from the crown down to her toes. It exposes a realm beyond the Sahasrara, which is the highest centre for humans. Here the goddess pervades not only the manifest – the universe – but also the un-manifest (that which is not visible), where she reigns the three worlds with three qualities namely, Sundara, Satya and Mangala which are beauty, truth and auspiciousness. In this most crucial chapter which is the fifth of the 12 Vedicfolks Signature Rituals, Soundarya Lahari Series of Homam, mantra and yantra worship for Verses 37-45 will be carried out to invoke the all-pervasive Mother. These chapters are very significant because after the union of Goddess Shakti and Shiva in the chapters preceding 41 (Ananda Lahari), Adi Shankara’s poetic acumen describes Devi’s beauty from head to foot from Verse 42 onwards. The supercharged mantras are like missiles that can cure deadly diseases, overcome vengeful enemies, materialize matter, restore lost status, earn wealth in plenty, and give much more beyond imagination.

Lord Shiva and Mother Shakti unite to propagate the universe, destroyed in the pralaya, and for the formation of a new Kalpa. Adi Shankaracharya continues to explain on the beauty of the mother and says that the vermillion that adorns her parted hair looks like the rising sun which brings brilliance into the lives of people. And its auspiciousness liberates people from pains of birth and death and her description says that she is Bhukti Mukti Pradayini. Soundarya Lahari Homam for Verses 37-45 will be performed on the Chandra Darshana during Ashada Navaratri Tithi which is considered which has great religious significance in the Vedic calendar. It’s the first day of moon sighting after the New Moon day and the moon sighting blesses with success and good fortune. Also, Mahavidya goddesses like Tripura Sundari and Bhairavi are highly connected with the moon and its energies so that you can overcome sufferings and misfortune in life and uplift your consciousness and psyche to a great extent.

Significance – Adi Shankara pays obeisance to the Devi’s Vishuddi chakra which is clear like crystal and having the qualities of ether whose creator is Lord Shiva. Shiva and Shakti glow like rays of moon that helps to remove darkness from the universe just like the chakora (a partridge) that needs the light of the moon to rejoice itself.

Significance – Comparing the divine couple to swans, the great saint says that the two drink the honey from the lotus of knowledge and wisdom. They swim in the pond of the heart of great sadhakas. The sound of the swans create the 18 kalas or arts referred to here as ‘aṣṭādaśaguṇitavidyāpariṇati’. The kalas emanate from the Anahata due to the high level of merger of Shiva and Shakti. The swans have the unique quality of separating the good and the bad like they separate water and milk.

Significance – Adoring the Samvarta aspect in the Swadhishthana chakra of Devi, which is the fire that consumes the Universe at the end of a cosmic cycle to make way for the next Yuga. It’s Lord Rudra that destroys the universe with this fire and it’s with the Devi’s compassionate glance that helps cools it. When the heavenly couple descend to this throat chakra they are surrounded by 62 rays of tejas and are worshipped as Samvartesvara and Samayeshwari.

Significance – The saint poet worships the unique dark blue rain cloud which abides in the Manipura chakra that is stricken with lightening in the form of the goddess, it dispels darkness in the universe with a rainbow that resembles the sparkling gems of the Devi’s ornaments. The rain of nectar cools the three worlds burnt by Rudra’s Kalaagni.

Significance – Worship of Devi’s Mooladhara chakra, where Aananda Bhairava (Lord Shiva) is dancing the navarasa tandava dance and the goddess referred to as Samayaa, is also swaying. The father and mother make efforts to create the world destroyed in the pralaya.

*Please note with the recitation of Verse 41, Ananda Lahari or the first half of this divine poetry comes to an end, and the second half or Dvitīya bhāgaḥ – Soundarya Lahari that unravels the beauty of the Mother – begins.

Significance – The Devi’s crown is embedded with precious gems and the rays emitted from them have the illumination of Dwadasha Aditya or twelve forms of sun. But Shankaracharya wants to know whether the intelligent one who sings her praise, will see the reflection as the rays of moon that causes the rainbow.

Significance –  The saint describes the Devi’s hair as a thick forest having fully blossomed blue coloured lotus flowers that removes the darkness of ignorance. He also wonders if the flowers of Lord Indra’s garden, which are said to be most beautiful and attractive, have got their fragrance as they live in her hair. Here the saint poet lays emphasis on the goddess’ hair that has a natural fragrance and also the flowers of Indra’s garden derive their scent from Her hair. The Ajna chakra also signifies deep blue colour and when the chakra is developed, one can realise the goddess’ luminosity.

Significance – The parting of Her hair resembles a stream overflowing during a flood. The vermillion that adorns her parted hair looks like the rising sun which brings brilliance into the lives of people. And its auspiciousness liberates people from pains of transmigration or cycle of birth and death.

Significance – Describing the Devi’s face, Adi Shankaracharya says that it is incomparable to any visual objects and the curls that fall on her forehead look like swarm of bees that adds beauty to her face. Her white teeth enhances the beauty and the bees that hover around her face (the curls) are the eyes of Lord Shiva.

Energized Yantra 42 – The Yantra 42 is shaped like a star which has eight corners that has tridents engraved on them. There are mantras for added power and advantage in the centre of the yantra to invoke Goddess Tripura Sundari. A devotee can meditate on the yantra with cooked rice, milk, fruits and jiggery. It is a remedy for problems related to moon dosha in the natal chart. It also confers high position and helps to accumulates treasures such as gemstones. The yantra invocation, cures diseases of the urinary tract, oedema, grants power to attract others, etc. For the fifth of the series of Soundarya Lahari homam, yantra 42 will be energized and given to our devotees.

Venerating the Divine Mother with Soundarya Lahari Homam for the fifth of the 12 series is rather unique because it’s the culmination of the first part Aananda Lahari and the second part, Soundarya Lahari. The powerful ritual relieves you from major ailments and sufferings. It gets rid of nightmares, subdues enemies, and removes Balarishtam of children. A true devotee is blessed with the power of foresight into future events and helps to accumulate gems and jewellery. The verses surcharge all the chakras in your body and provide relief from sun and moon dosha. The ritual to the Devi Tripura Sundari helps to derive auspiciousness and good fortune especially for women. It augments the features of the body and enhances the looks and makes one a centre of attraction. Also get the blessings of the eight goddesses of wealth, Ashta Lakshmi. 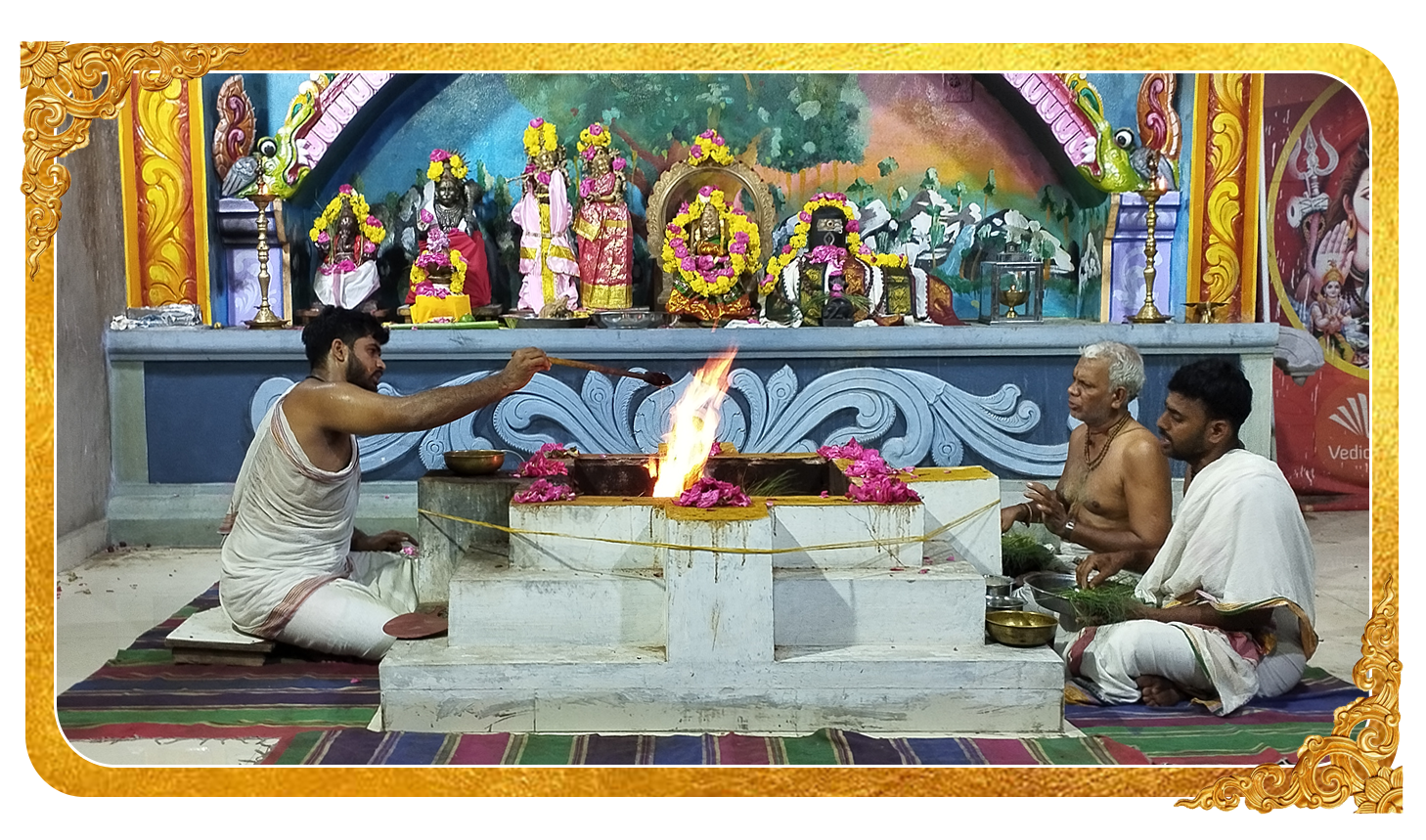 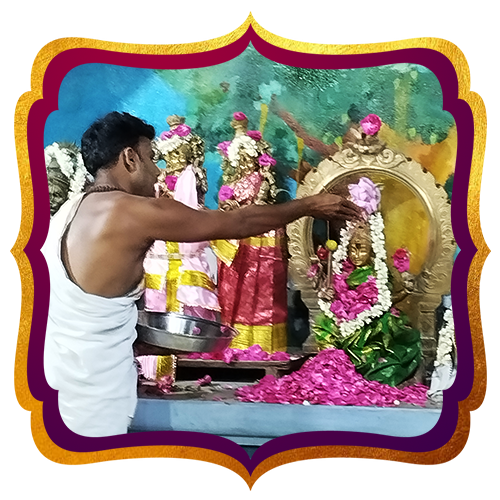 As part of our ceremonies for the day, Yantra pooja will be performed for Verse 42 of Soundarya Lahari. Each of the hymns is associated with a yantra and mantra. The energies of the mother will be invoked on the yantra for verse 42 in order to achieve the specific wishes of the devotees. The yantra has a sacred drawing of an etched square that is crisscrossed in the centre with two tridents. From all the four corners of the squares, tridents protrude outwards making it a tool of great power for protection. The benefits of the pooja promised on this particular Yantra 42 include remedy for Sun and Moon-related problems in the natal chart, cures oedema, swelling and urinal diseases, it also helps to achieve high position and accumulation of gems. One also achieves the power to attract others. 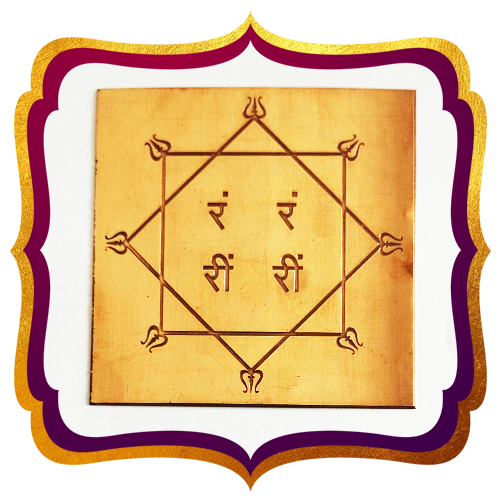 Install the Energized Soundarya Lahari Yantra 42, made of copper, in your puja mantap or altar and chant the mantra 42. You can also chant Lalitha Sahasranamam by offering red flowers to the yantra. You can even offer cooked rice, milk, fruits and raw sugar. The yantra worship ha the powers to relieve you from swelling, oedema, urinary infections, etc. it is also alleviates malefic effects of sun and moon in your natal chart. The yantra facilitates accumulation of precious stones and grants high position in life.