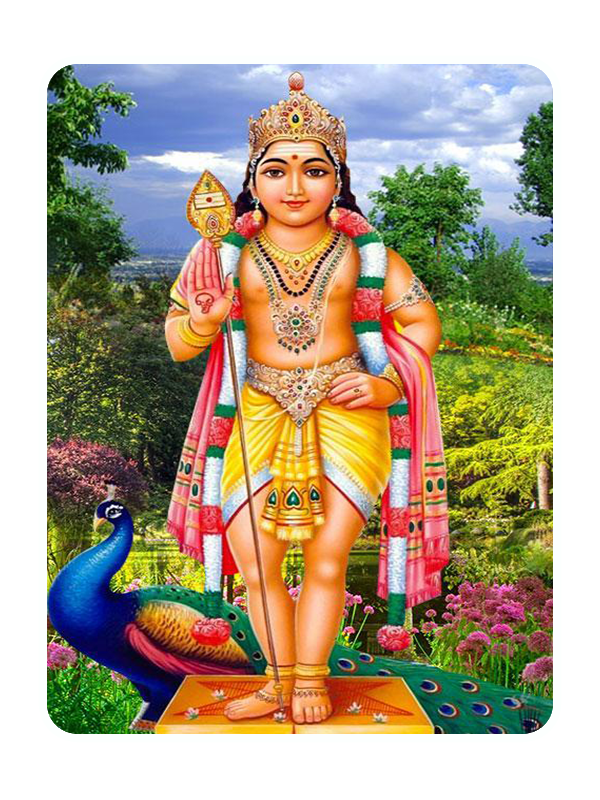 Performing the auspicious Lord Skanda Sahasranama Homam and reciting Lord Skanda Sahasranamam, at this divine point of time of Thaipusam commemorates the deep understanding between Mother Goddess Parvati in the form of Goddess Skandamata and Lord Skanda, who is bestowed with four arms, two hands holds the Lotus, symbolize wealth, third hand holds the sacred baby Lord Skanda sitting on her lap divinely and the fourth holds Abhaya Mudra, a posture of ready to bless boons to those who seeks the blessings of Goddess Skandamata, solving life problems. This is the auspicious time period when Lord Skanda received the divine “Vel or Spear" from Goddess Skandamata, to put an end to the evil demon Tarakasura, saving from destruction, restoring dharma, where Lord Skanda became the God of War against demons, diminishing the energies of Tarakasura, to dust. This period is a bright phase for all spiritual practices to worship, to perform rituals, render a deep meditation, offering dedicated prayers for seeking the blessings of Lord Skanda to attain his grace, the supreme well-being, at this sacred time, blesses all with rays of energy in the form of light eliminating the dense darkness, love, affection, joy and happiness, illuminate sacred minds of sages with wisdom, enhance divine energy invoking them to search for hidden truths of great works, bringing liberation, boosting growth, cherishing nourishment, attaining spiritual pleasures, bestow majestic look and appearance, qualitative traits, unique characteristic features, mental ability, regulating control, management and execution effectively, expanding talents, manage disruptive emotions, anxiety, impulses, generate self-consciousness, create material gains, unending wealth and prosperity.

Lord Skanda Appearance: According to the divine-filled skanda purana, Lord Skanda appearance in the universe is a great ideology according to the poem Kumarasambhava which was scripted by the epic Sage Kalidasa, which capsulized the birth of divine God of War. Lord Skanda to destroy the evil demon Tarakasura who earlier have availed a boon from Lord Brahma that he shall be killed only by a son of Lord Shiva, was the result of a great penance by Takarasura. Subsequently, love between Lord Shiva and Goddess Parvati took place, whereby Lord Agni finally took the seed of cosmic energy and dropped it into the Mother of Ganges, which gave the auspicious energy to give birth to divine god, Lord Skanda.

Nurturing of Divine God Karthikeya: Lord Karthikeya is another form of Lord Muruga, the Skanda is known to be “Krittikas”, which is nothing but “Krittika”, denotes birth-star “Kritheka” or it is also called as “Karthika”, divinely linked to the auspicious day of birth and deeds. When he appeared for the first time on the banks of River Ganges is seen by six brightest stars of seven clusters in the night sky by “Krittikas”. The six mother stars all were prepared to take and nurse the baby child Lord Karthikeya which gave birth to five other divine heads whom can be individually nursed by six divine seed of Lord Shiva, who are called as Siva, Sambhuti, Priti, Sannati, Anasuya, Ksama.

Tirupuranagiri: According to the devoted skanda purana, the famous Lord Subramaṇya Swami Temple is situated at the foot of the hill, called Tripuranagiri, the famous Kanda Madanam and the Kanda Malai, is one of the six Arupadaiveedu is surrounded by tall mountains, where some bunch of solid rocks were cut into tiny blocks have created the temple Lord Subramanya Swami with hollowed pillars, platforms, inner shrines situated in the place called Thiruparankundram, is also called as Parankundram, which was one of the fourteen Pandya Kingdom landmarks, the famous Sthala. Lord Shiva is called in this abode with a unique name Payamgirinathar. In this abode Lord Muruga in the form of Lord Subramanya Swami have put an end to the demon Soorapadman, who split the demon into two pieces, later appeared in the forms of Peacock and Roaster, the two divine vehicles of Lord Muruga. In this temple, Lord Muruga married Goddess Deivayanai, who is the daughter of King of Heaven, Lord Indra.

Saravana Poigai: In this divine place Tiruchendur, Lord Shiva gave creation to six flames of cosmic energy from his third eye namely, Lord Sadyojata, Lord Vamadeva, Lord Tatpurusa, Lord Isana, Lord Agora and Lord Jammuka Shiva, which is quite unique forms of Lord Shiva and all the six where let into the River Ganges under his advice by Lord Vayu and Lord Agni. The six flames gave birth to six divine children enchanting in six divine lotuses, who were nurtured and fed by Goddess Karthika. Goddess Parvati after knowing the divine appearance of six children combined them into one body with six unique faces, who were later named as Lord Skanda, who received the divine weapon the Spear or Vel, went with is army to destroy the demon Soorapadman.

Dandapani, the “staff-wielder”: According to sacred skanda purana, Lord Muruga is auspiciously called as “Palani Antavar” appearing with two hands, is one of the six abodes of Lord Muruga. On the right hand holds “kataka-hasta” the auspicious cenkol and the left-hand attributes are “katyavalambita-hasta”, in a standing posture is sacredly called Vaisakha. Samapada-sthanka is the dance posture, with right hand placed in kapittha and left hand placed in ardhacandra, the waist, blesses all with flourishing in arts and crafts, music and dance, sound health, high well-being, joy and happiness, supremacy, cure disease, bestow medicinal healing for infectious disease, abundance of material gains, prosperity.

Praṇava Mantra to Lord Shiva: Famous Swamimali is the abode of Lord Muruga who takes the role of Guru the Brahaspati, teaching the Pranava Mantra “OM” to Lord Shiva, which is the sacred energy of being omnipresent, omnipotent and omniscient. The pranava mantra “OM” is said to be one of the faces of Lord Muruga and said to be the foundation of Vedas. According to Sage Kachiappa Sivachariar, Lord Siva is said to be seated on the Pranava mantra. Pranava mantra when recited helps devotees to cross the ocean of Samsara.

Creator of Wealth: According to a legacy Lord Indra the king of Gods has given his daughter Deivayanai in marriage to Lord Skanda, have presented the sacred elephant Airavatam, as part of his offering, as dowry. Subsequent to this Lord Indra found is wealth multiplying, expanding and growing creating in the universe with material abundance, wealth gains and prosperity.

Lord Muruga, teachings to life: Lord Muruga six faces teaches six lessons in life. The first denotes spreading life of knowledge and awareness, which is wisdom, remove darkness. The second denotes gracious appearance, grants boons of courage, strength, prosperity. The third denotes guards the sanctity of sacrifice of brahmanas. Fourth denotes creating awareness in sages, to go in search of hidden absolute truth, enlightens the minds of saints and sages. The fifth denotes destroying the evil, diminishing the demons to dust. The sixth denotes love and affection to his family, enjoying the company of Goddess Vali.