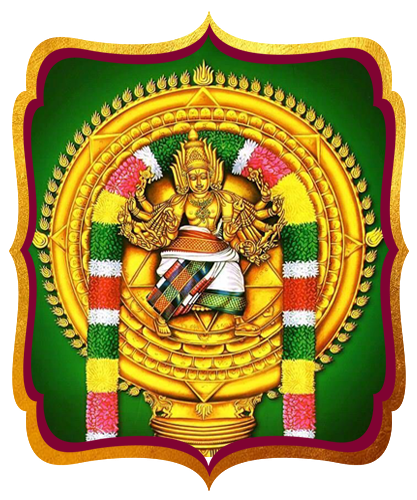 Sudarshan is a personification of the discus held by Lord Vishnu. The powerful weapon, the Sudarshana Chakra is a spinning disc-like instrument having 108 serrated edges. The word Sudarshana means auspicious vision and one of the qualities of the divine wheel is Pida Pradanam which means that it gives immediate relief to pain and suffering to the seeker. Another powerful quality of the chakra is Papa Nashanam i.e. destruction of sins. A person needs to adopt these qualities in order to realise God. Sudarshana Chakra was made by Lord Vishvakarma, the architect of the universe. Lord Vishvakarma’s daughter Sanjana was married to Lord Surya, the Sun God. She was unable to get close to Surya because of his terrible heat. She complained to Lord Vishvakarma about this who in turn made Surya shine less bright by shaving off some of the radiance. The left over dust from the Sun was collected by Vishvakarma and made into three objects – Pushpaka Vimana, Trident of Lord Shiva and Sudarshana Chakra of Lord Vishnu.

The mighty flame, Sudarshana Chakra is an important aspect of Jwala Narasimhar who destroyed Hiranyakashipu, father of Prahlad, a great devotee of Lord Vishnu and who also resides in the Sudarshana yantra. Offering obeisance to Sudarsharana Chakra on its Jayanthi day is equal to worshipping ten forms of Maha Vishnu. Sudarshana Jayanthi is the day when the divine wheel manifested. The day is also celebrated as Shukla Paksha Ashada Dasami by certain Vaishnava sects. Rituals like Sudarshana Homam on Sudarshana Jayanthi helps to cure various illnesses and pandemics. The divine weapon which is also personified as Chakrathazhvar is also worshiped for protection, positivity and bestow victory, robust health, wealth, bliss and Salvation.

The Sudarshana Chakra is mentioned in the Rig Veda as a symbol of the Lord. Invoking this heavenly weapon with powerful mantras abolish all obstacles, gives immediate relief to pain and sufferings, and bestow well-being to the family. It helps to remove all evil causing negativities and negative effects from the path. Sudarshana mantra has immense power to rid of all complexities due to planetary doshas, curses and evil forces.

The Maha Sudarshana Homam removes all types of negativity like evil eye, black magic influences and obliterates enemies. Maha Sudarshana Homam gives relief from unknown health problems and destroys evil eye castings. Worshiping Lord Sudarshana helps to achieve highest goals in life and to acquire highest positions in respective fields. The ritual protects against harmful elements like enemies, evil eye, spirits and negative energy and also has the power to prevent mishaps and unforeseen dangers. The positive vibrations keep you surcharged and helps to foresee threats that cause hurdles in your path of success. It improves your status in society by uplifting your career and business.

Lord Sudarshana or Maha Vishnu is the chief deity of this Homam and His chakra relieves people of all sufferings. The wheel also has the power to weed out the sins of people. It provides relief from mysterious, long-suffering, incurable diseases. It safeguards your home against strong evil forces like Pishacha, Dakinee, Shakinee, Mohinee, Bhoota, Preta, Betala and Brahmarakshasa. The homam purifies the body deeply and cleanses it of all impurities. It promotes success in all ventures, bestows grace and vitality. It clears karmic debts of all kinds. By performing Sudharshana Homam you get health, wealth, chastity, generosity and prosperity. 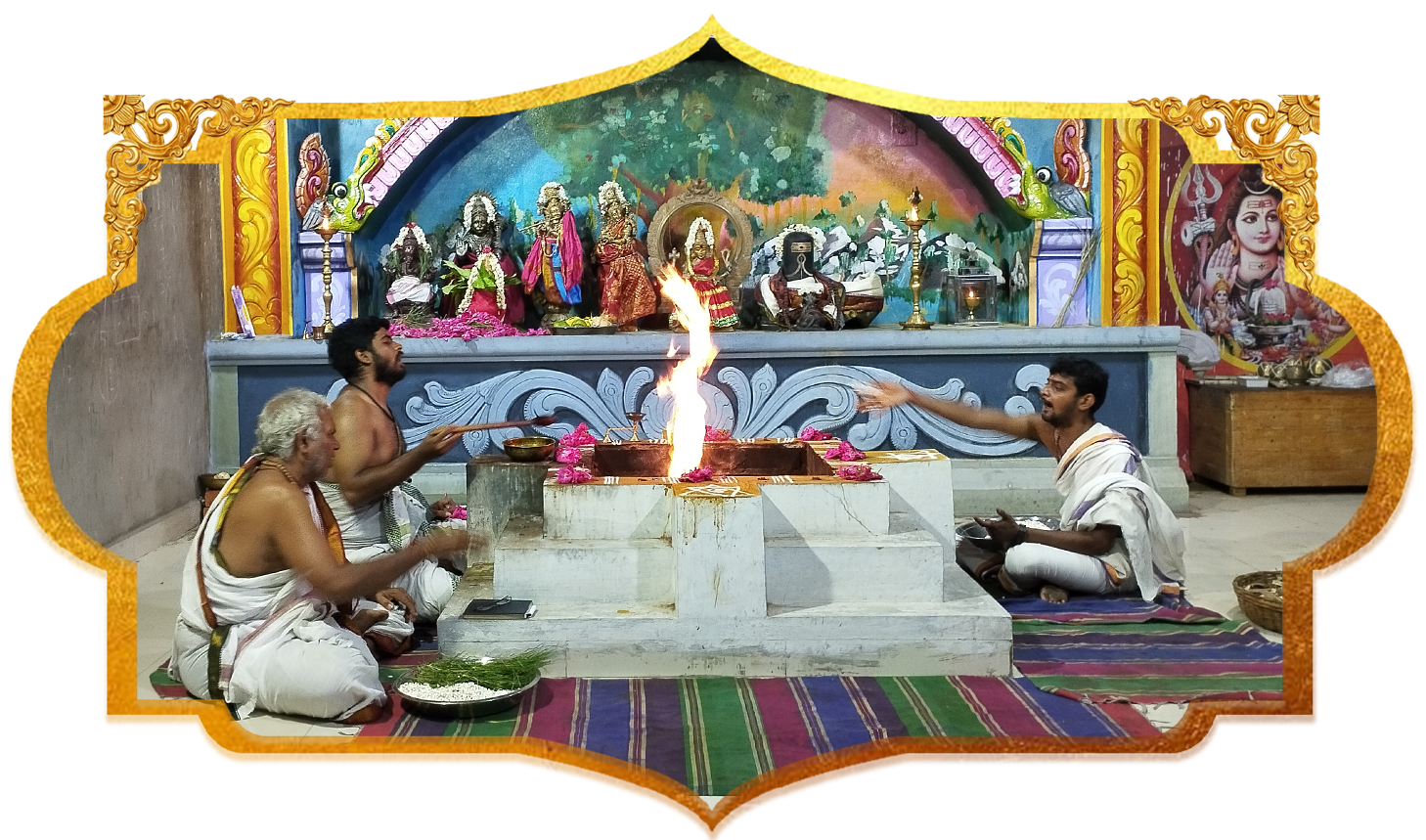 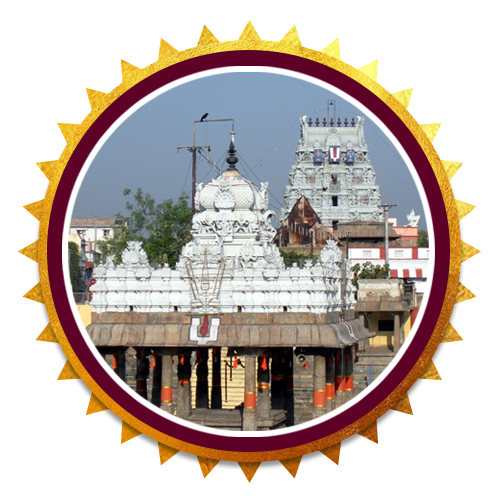 Sri Parthasarathy Temple is situated in Tiruvallikeni in Chennai, India. According to temple texts Goddess Vedavalli, consort of Lord Ranganatha, one of the five main deities of the temple was born on a lily flower in the temple pond and hence the place came to be known as Tiruvallikeni where Alli Keni means in front of the temple. The temple is dedicated to five forms of Maha Vishnu – Narasimha, Rama, Varadaraja, Ranganathar and Krishna. A puja in this ancient, popular temple cures infections and ailments. The lord also blesses with a good marriage, child boon and outstanding education and wisdom. Also receive blessings of riches, prosperity and sound posterity. 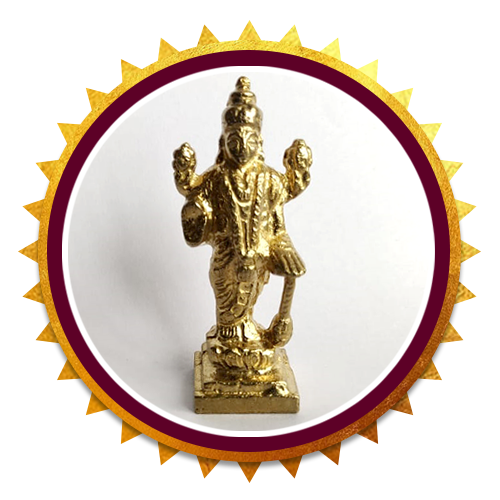 Lord Vishnu is also known as Narayana or Hari. The lord’s prime duty is to preserve or protect and uphold dharma. His ten forms Dasavataram is a unique saga of his manifestation in different form to save the earth and his devotees. This exquisite brass idol of Lord Vishnu is a compact one that you can keep in your puja alter or can be used for any other purpose that involves divine presence. He’s the most benevolent god who is ready to serve his devotees in times of need. Lord Narayana removes sins of the past, protects you and grants blessings of knowledge and respect in society. He is also the lord that gives ceaseless growth in fortune and uplifts your financial status. He also bestows moksha or salvation.