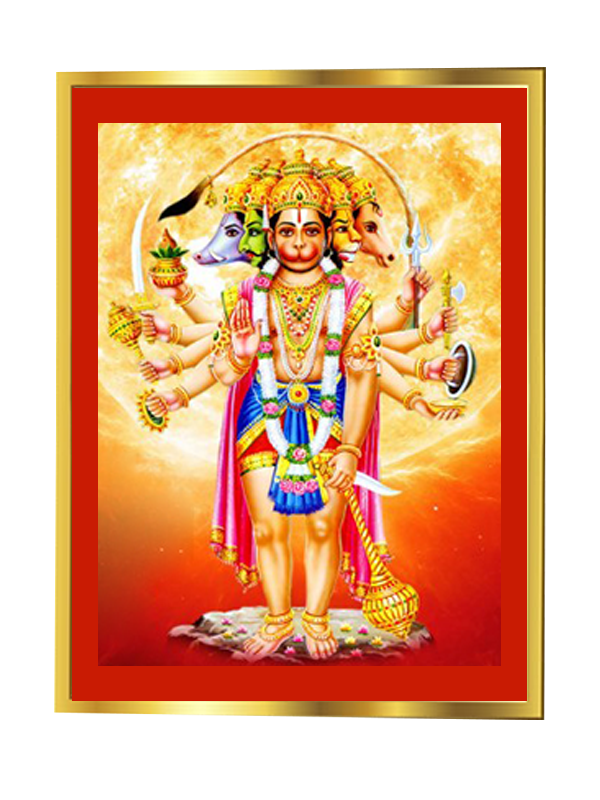 Lord Panchamukha Hanuman Homam on Lord Hanuman Jayanti is auspicious is the destroyer of all evils, negativities in life, one who is the giver of knowledge and strength. He has taken this form to protect Lord Rama and Lord Lakshmana from the clutches of Ahiravana, Lord Hanuman with his knowledge and courage took the form as Lord Panchmukha Hanuman with the blessings of five faces in the form of Lord Hayagriva, Lord Narasimha, Lord Garuda, Lord Varaha and the fifth face being Lord Hanuman himself, whereby using different faces at different directions, blew out all the lamps at the same time, killing Ahiravana, rescuing Lord Rama and Lord Lakshmana from Pathala Loka is called as destroyer of all crisis, is the giver of plenty of strength and wisdom.

Lord Hanuman is the son of wind god Lord Vayu, born as monkey, hails from animal kingdom, possess great cosmic elements and aspects of devas, is a most powerful incarnation of Lord Shiva as Pavanaputra Hanuman is considered to be an energy of strength, devotion, perseverance, showing a great value of knowledge and learning, knowledge of all Vedas and master of all weapons. 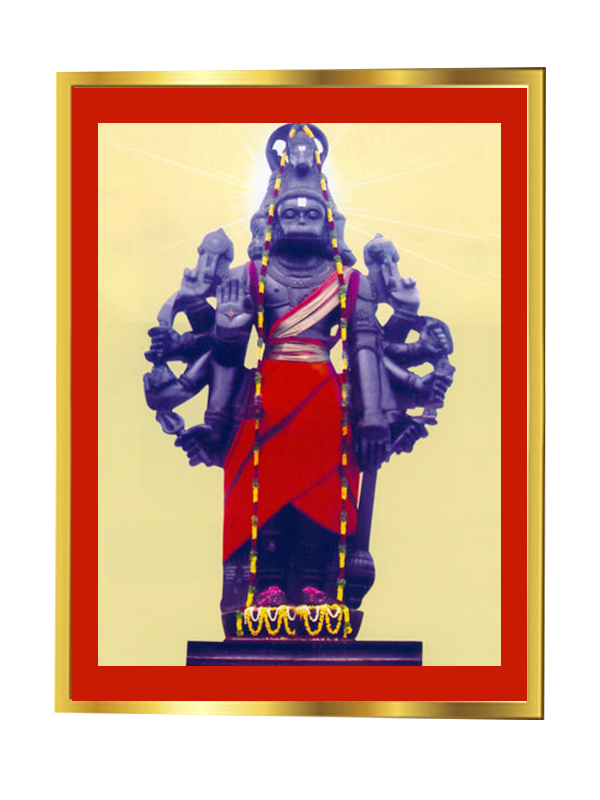 According to ancient practice worshiping Lord Panchamukha Hanuman, performing the auspicious Homam on this day of Hanuman Jayanti, gives a remedy to five type of problems in life energizing five faces, one as Lord Hanuman himself winning over enemies, second as Lord Garuda removing crisis and troubles in life, third as Lord Varaha usher fame and immense power, fourth as Lord Hayagriva fulfilling life desires and fifth as Lord Narasimha puts an end to fear and tension, blesses all devotees with showing the path of well-being, happiness, fulfilling the needs, life desires and wishes, bestows calmness, tranquilness, self-mannered, highly self-possessed with self-control, characterized by surrender or acceptance, being wise and careful, possess good judgmental powers, deeply held and intense in execution, highly submissive, profound or bow and serious on matters of high importance, being quiet winning over challenges, still be at peace, free from anger, anxiety, negative thoughts, being persevering, tolerant and constant with understanding, calmly with diligent, bestows wisdom, devotion to god, courage and fortitude, cosmic order, divine blessings, abundance of wealth, prosperity. 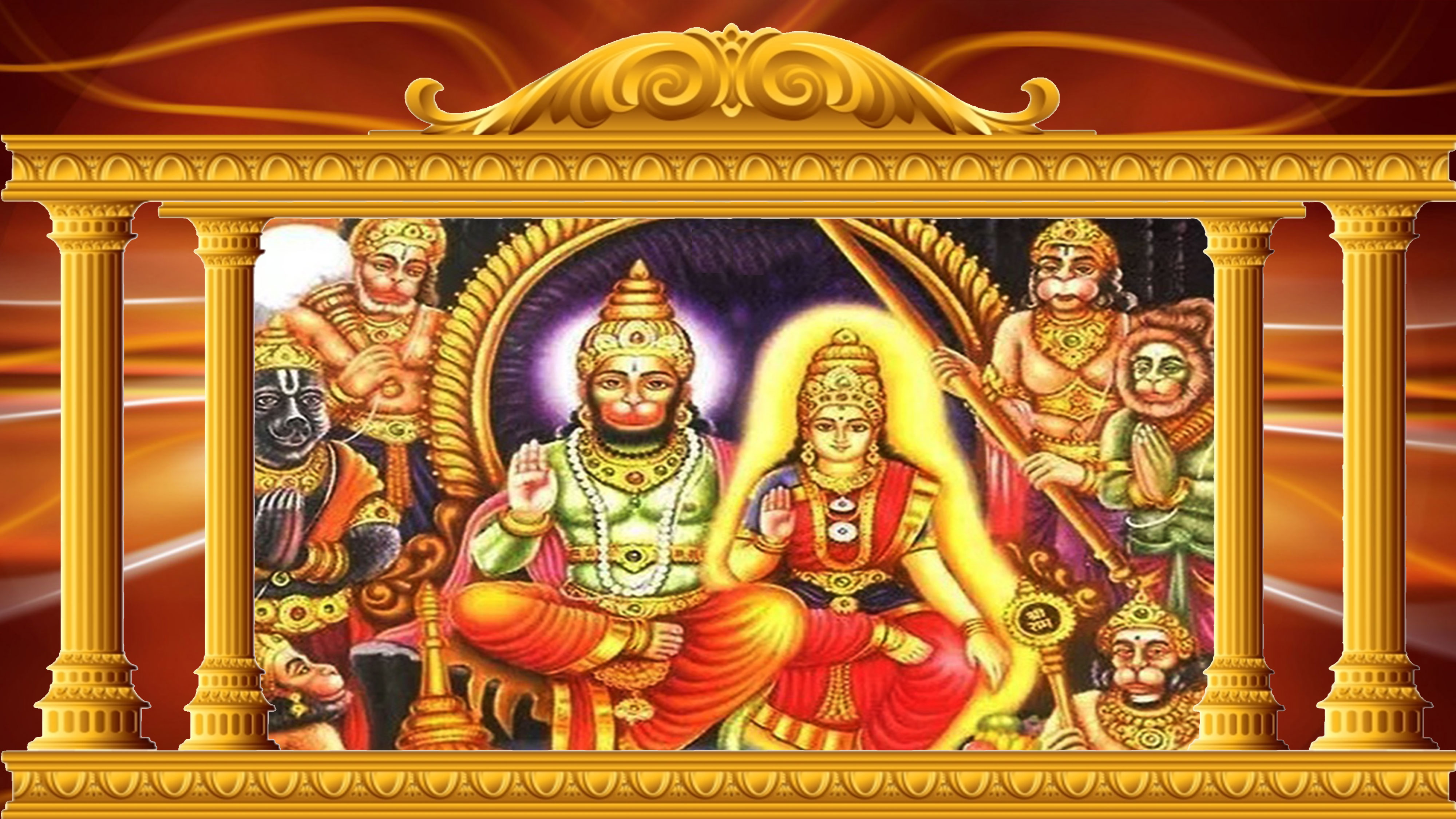 Lord Hanuman Jayanti is celebrated as the birth of Lord Hanuman is considered as one of the avatars of Lord Shiva is said to be the child of a nymph by the wind god, once as a child tried to grab the sun mistaking it as a fruit got hurt on his jaw i.e., Hanu, is a personification of nature, who was born on the Anjaneri mountain. Lord Hanuman father is Kesari and his mother Anjana is said to be an apsara, who was born on earth due to a curse and was relieved from the curse after giving birth to a son, where Anjana performed an intense penance for a period of 12 long years was blessed with a male child by Lord Rudra where Lord Hanuman is said to be the reflection of Lord Rudra himself. Lord Hanuman is said to be a deity to be worshiped to attain victory against all enemies and evil spirits, provides protection is a symbol of energy and strength.


Lord Hanuman is said to have mastered the four Vedas and Nine Vyakarnas and worshiped Lord Sun as his Brihaspati. But being Aajanma Brahmachari Lord Hanuman as Brahmachari was not able to master Nava Vyakarnas. In order to complete his full-fledged education, the trinities approached Lord Surya and created a beautiful girl by name Suvarchala Devi from Lord Surya’s rays. Lord Hanuman have married Goddess Suvarchala Devi and depicted as Gruhasta and mastered the Nine Vyakarnas. As was an ardent devotee to Lord Rama he has spent rest of his life serving Lord Rama. Lord Hanuman with Goddess Suvarchala Devi depicted with four arms and performing on Hanuman Jayanti Lord Panchamukha Hanuman Homam blesses all with strength, devotion and protection against evil spirit, bestow boon and blessings of immortality, valor, invincible and strength, destroy fear in the minds of devotees, blessing physical strength, powerful energy, good health, wealth and prosperity.

Lord of Expression: Lord Hanuman is the master of arts, an effective communicator with unique speaking abilities was the only messenger to Lord Rama where Lord Hanuman met Goddess Sita on his first visit to Lanka and in Ashoka Vatika was hiding himself inside the branches until Goddess Sita noticed him and to create a trust started reciting the virtues and deeds of Lord Rama, whispering in his gentle tone, till Goddess Sita noticed and heard him and he is seeing Goddess Sita for the first time. Lord Hanuman have tried to convince Goddess Sita that he was Lord Rama's ardent devotee and close friend and finally she took note of the ring which was sent by Lord Rama to Goddess Sita, she got convinced and glad to talk to Lord Hanuman, about his visit.

Lord of Humbleness: While Lord Hanuman crossing sea, the gods and devas want to test Lord Hanuman of his strength and wisdom and how humble and polite he deals matters. When Lord Hanuman reached a short distance, trouble erupted, a sea-demoness Sinhika was in search of food took note of Lord Hanuman shadow, using her invisible power swallowed Lord Hanuman, but he tore upon her belly and came out safe and found healthy and sound. Also, underwater demon Sursa had given a test and he completed successfully and he bowed low before Sursa and took leave of her saying “Dear Mother, I shall take leave of you, now” very gently and politely. With her blessings Lord Hanuman was able to cross the sea without any hurdles.

Lord of No Compromise on his Ideology: Lord Hanuman in Lanka when he had to fight demon Meghnath, Lord Hanuman was so gentle, controlled his emotions as he is master of Yogic practice. When demon Meghnath displayed the power of the weapon “Brahmastra”, against Lord Hanuman, he took very pleasantly in handling the weapon not by breaking and lessoning its importance, but teaches universe his Bakthi and respect towards the weapon “Brahmastra”, not compromising his basic ideology, even at the time of fight and war and use his strength and wisdom, appropriately.

Lord of Solution: Lord Hanuman is a provider of Solution to all problems in life. In Lanka Battle Lord Lakshmana was hit by an arrow of Indrajit, who nearly killed Lord Lakshmana. Lord Hanuman took the advice of Physician Sushena, an expert Ayurvedic Practioner, left to Mount Dronagiri (Mahodaya), but was unable to identify the herbs he wants, instantly decided and uprooted the whole mountain, restored the life of Lord Lakshmana, providing a timely solution to the problem.

Lord of Nobility: Lord Hanuman on his return from Lanka after seeing Goddess Sita of her wellness and prosperity, stood before Lord Rama so diligently with nobility with calmness bowing himself showing heighten of morality, respect to his master, basic ideals and invert behavior without boasting his achievements.

Lord of Skills & Traits: Lord Hanuman who was instrumental in extending the bridge in the sea, used his organizational traits in setting the bridge in order with the support of all his team mates of mischievous monkey’s using his leadership skills and getting the task of completion very promptly on time.

Lord of Attitude and Behavioral traits: Lord Hanuman is called with unique names as, Lord Bajrang Bali, Lord Chiranjeeva, Lord Anjaneya, Lord Maruti, Lord Deenabandhave, Lord Kaalanabha, Lord Mahadhyuta, Lord Manojavaya, Lord Rama Doota, Lord Rama Bhakta and many more. But he never showed his power to anyone boosting his image and take his depiction appropriately where necessary. When he wants to cross Lanka, he had to take a very large image of proportion as Gargantuan. When he wants to sneak into Demon King Ravana’s palace, he added undue value to himself and changed instantly as an unidentified monkey to search for Goddess Sita and discovered. He teaches universe that no one is supposed to boost of their powers and capabilities and expected to behave in such a way, as appropriate as the situation wants.

Lord Panchmukha Hanuman Vrat is highly sacred and auspicious according to scriptures, one who pacifies Navagrahas instantly, provide his blessings clearing all obstacles, troubles, and crisis, remove all black magic, ghost fear, evil energies in life, bless boon to beget a child, bestows courage, strength and effort. Worshiping Lord Hanuman for 21 consecutive Tuesdays to observe fasting and meditate on Lord Hanuman who is blessed by Lord Rama a boon of being Chiranjeevi, of attaining immortality till the end of Kaliyuga, blesses all with Valor, Strength, Positive energy, service and devotion, has magical influence over devotees, one who protects all from debacles and most sought-after Lord Anjaneya by younger generation. 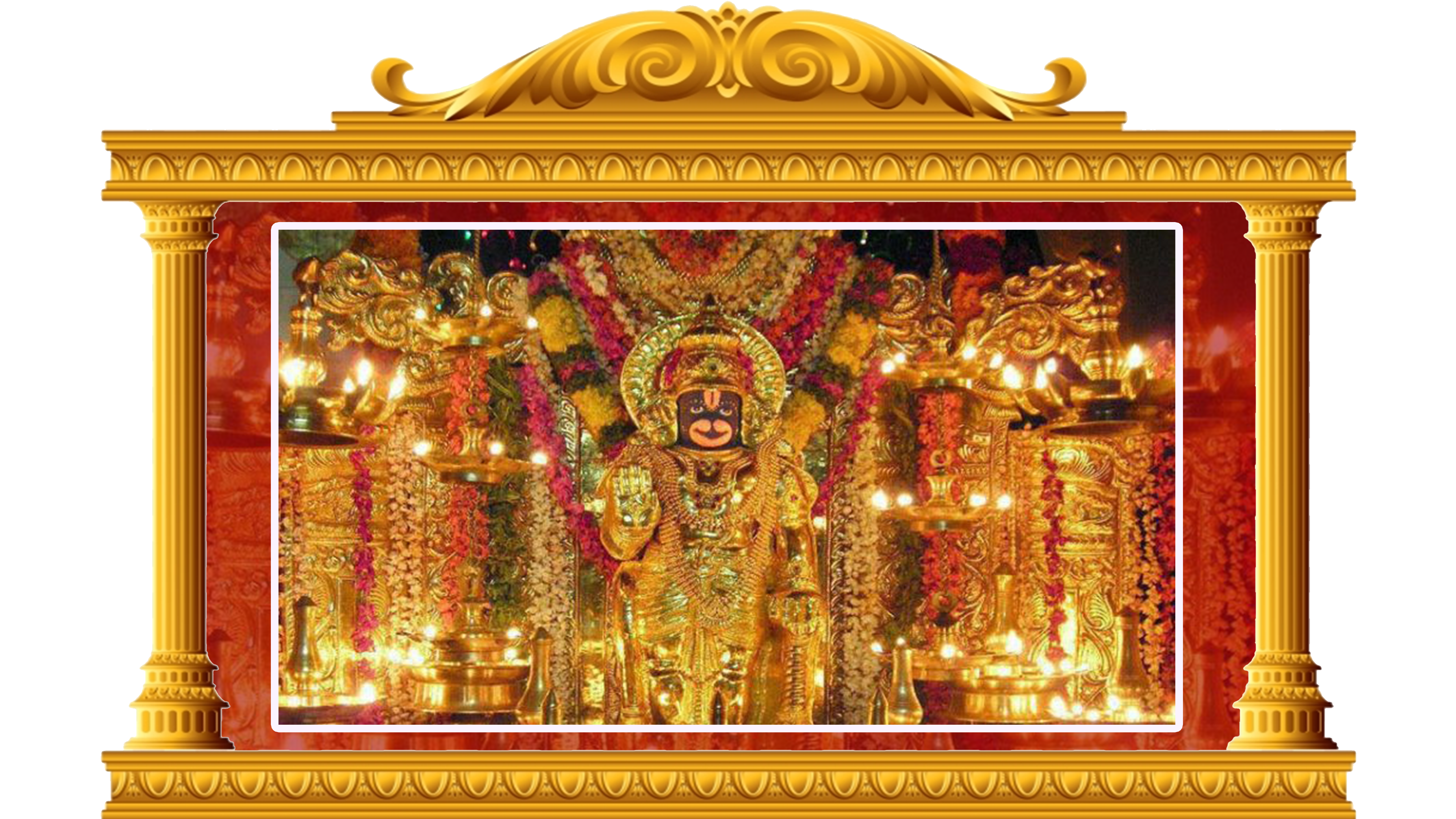 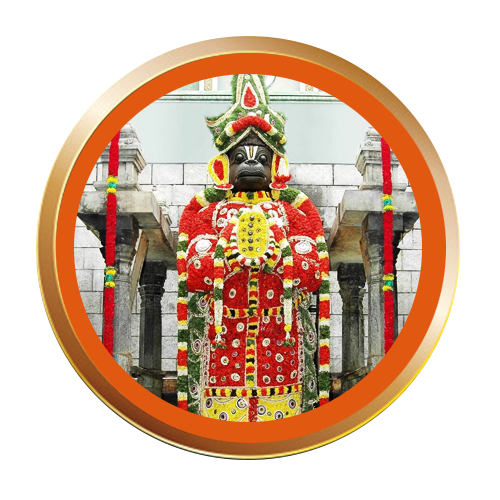 In this temple, Lord Hanuman in the form of Anjaneya popularly known for bestowing good health for devotees. On the north west corner, abode of Lord Rama has been consecrated with Goddess Sita and Lord Lakshmana with Lord Anjaneya, presence. Lord Rama with Goddess Sita facing east depicts as a protector and ruler with his bow in the form of Lord Kothanda Rama blesses on this day of Hanuman Jayanti and Lord Panchamukha Hanuman Homam clearing all Doshas, mental, physical disorders, peace to mind, balance harmony in all matters of life, mastering mind, organs and senses, bestow sound relaxation and deep meditation, cures problems of sleep, liberate from black-magic and evil spirits, bestows trouble free life. In this temple there is a shrine for Lord Krishna with Goddess Rukmani and Goddess Satya Bhama who is facing east and devotees are blessed to offer Thulabaram, to worship Lord Krishna who brings unity and harmony in the family, blesses love and affection, virtue, charming appearance and immense power, bestowing early marriages, wedding bells in the family, boon with a child for childless couples, being kind, compassionate, forgiveness, bestows good health, wealth, jewelry, ornaments, prosperity. 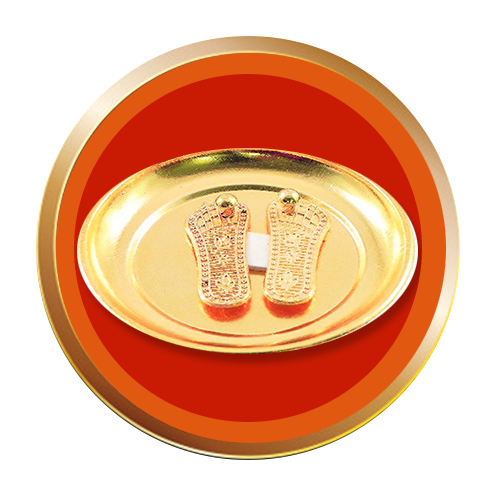 Energized Lord Rama Paduka Puja Item is an auspicious energy of Lord Rama, brings deep spiritual thirst, set the path to attain Moksha in a spiritual way, leads to the abode of Lord Rama, lies through the path of Dharma. Worshiping Lord Panchamukha Hanuman Homam on Lord Hanuman Jayanti blesses all with, material prosperity, endless variety and diversity in approach, path of victory, alter the path of violence to non-violence, non-injury to self and others, overcome enmity, Adharma, bless all devotees with fundamental principles of dharma, conduct of cultured approach, goodness, knowledge of value thoughts, comforts and luxury, moral codes of life, removes indebtedness, clears severity and vexing embarrassment, bestows with long life, happy family, bold and courageous, energy and strength, brings wealth of life, good health and prosperity.