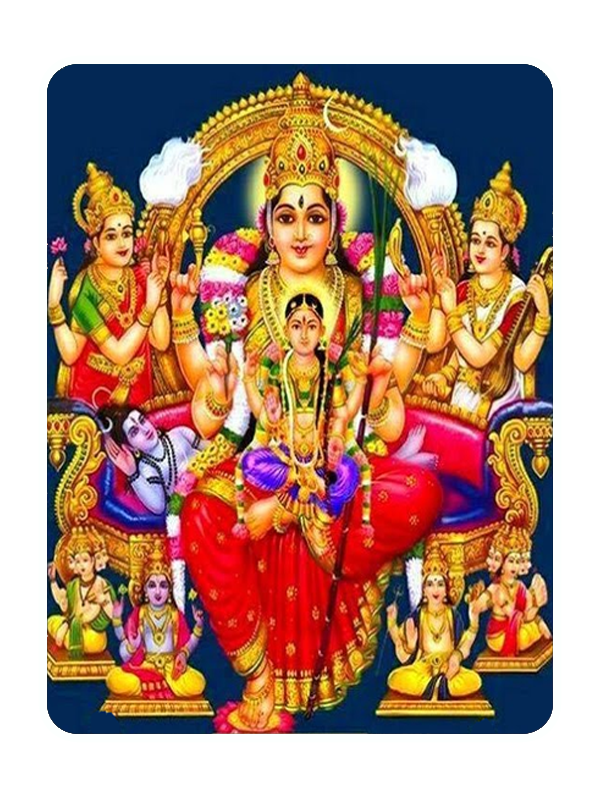 Goddess Lalitha Sahasranama Homam is worshiping Goddess Lalitha Tripura Sundari the manifestation of Goddess Shakti the divine mother of earth is one of the ten mahavidyas, who is the incarnation of Goddess Parvati. Goddess Shakti is the consort of Lord Shiva, the destructor. Goddess Lalitha Tripura Sundari is in the form of Goddess Parvati, is a most powerful potent goddess of all incarnations who depicts her self-roopa, resembling as very closely to Goddess Parvati or even see Parvati herself in her grandeur, with a sacred as in where “Saguna” i.e. with no quality difference or have attained “Parvati Guna”, which is a very special characteristic features and a sacred splendor of manifestations, in an more natural unified divine form. Goddess Lalitha Tripura Sundari is the inceptor of Pancha-Krityas who have accomplished its incorporation in the presence of Lord Shiva which is the combination of Shristi the creation, Sthithi the protection, Samhara the destruction, Thirodhana the concealment of universe in Maya and Anugraha the final liberation of life cycles, death and rebirth.

The basic form of Goddess Lalitha Tripura Sundari is with four arms and weapons namely flowery bow, flowery arrows, noose and goad, resembling the ultimate primordial Goddess Shakti, who is the glittering light of manifestation. The Goddess is the creator of alphabets who gave birth to the three worlds, the earth, the heaven and the pathala. Goddess Lalitha means "She is the Person, Who Plays" the creation, embodiment, destruction, is the role of cosmic power, symbolize render good to prosper, turn bad to evils, remove negativities. 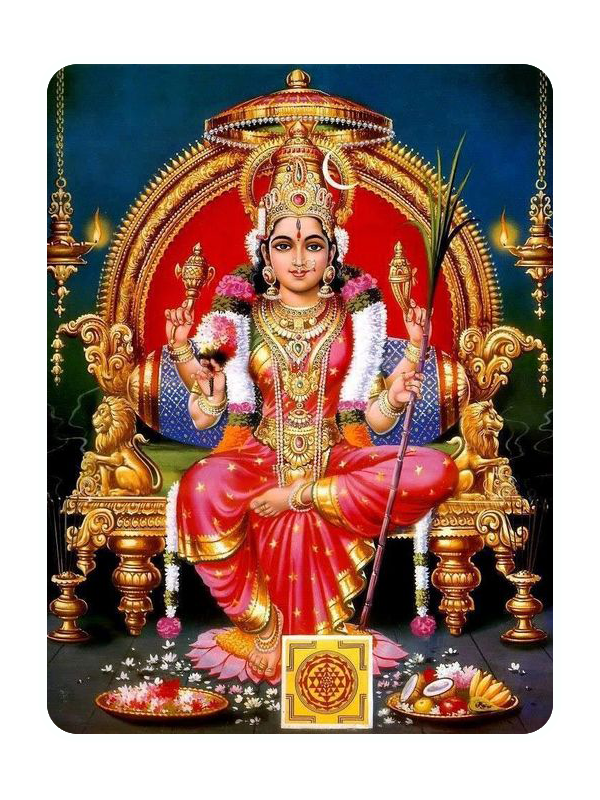 Chanting Lalitha Sahasranama, 1008 names of Goddess Lalitha Tripura Sundari is a highest supreme being which speaks both formless i.e. Nirguna and the form which is Saguna, emits “Glittering Brahma Swaroopa”, the soul of eternal consciousness along with Blissful Qualities in the form of “Sat-Chit-Ananda Swaroopa”. Chanting Lalitha Sahasranama 1008 names of Goddess Lalitha is equivalent to praising her works, her sadhanas, her swaroopa’s, the aspirants is said to attain the Saguna Upasana of Devi which is an unparallel or unequal energy of universe, appearing in unique forms, one who performs many functions for universe, not limited only to creation, sustenance, destruction, rebirth and deliverance, is known for her glorifying approach and her appearance as Devi, as revered in Lalitha Sahasranama, is a sacred unique energy of prime as scripted in Lalitopakhyanam, blesses all with plenty of love and affection, family fulfillment, happy bonding, friends and relatives support, face no shortages or shortfall at home, removes fear of death, fear of unknown evils, bestows with peace, knowledge, grants all kinds of wealth, fulfilling desires, good fortune, enlightened life, a therapy of healing to end all infectious disease, pains, sufferings, an end to dislikes, hatred, bad forms, remove hurdles, lead joy, peace in life, bestows boons for childless couples, bless abundance of wealth, good health, prosperity.


By the power of cosmic energy created Goddess Shakti Swaroop by the joint powers of Lord Brahma, Lord Vishnu, and Lord Shiva, to enforce peace. She is none other than Goddess Lalitha in the form of Goddess Durga. Goddess Durga was incarnated as the most powerful and beautiful Goddesses with ten arms and weapons is appeared in the universe on her Vahana, the Lion. That was the time the demi-gods and devas was terrified by the violent approach and was terrifying by a demon by name Mahisasura, who was once blessed with a boon by Lord Brahma that only a female origin can kill him have been trailing steadily on the feeling that no one dare to kill him. When the demon defeated Lord Indra, the trinities decided to create an energy Goddess Durga, a divine feminine energy, who later killed the demon Mahisasura with her weapon trident and this day is called as an auspicious Durga Ashtami.


The aspirants also observe fast on this day getting early in the morning, observe the Vrat from sunrise, after taking bath. Worshiping on this day Goddess Lalitha Tripura Sundari is very auspicious in the form of Goddess Durga. The aspirant lights Diya, Incense, Camphor, worship with Aarti, Goddess Lalitha blesses all erasing all sins from deeds, peace, strength, face hardship with no fear, safe-guard women and children, attain safer motherhood, keep away the evil energies from women and children, gain confidence, courage, strength, protection, attain peace, success in all life endeavors, unending prosperity.

Incarnation of Lalitha Tripura Sundari: From the ashes of Manmatha, the demon King Bandhasura came into existence, who made the world impotent and troublesome, started disturbing the demi-gods and devas, who after taking the advice of Lord Narada and Trimurtis, took the help of formless Nirguna Brahman, the god head ultimate in the form of Truth, Consciousness, Blissful appearance, later incarnated as Lord Maha Sambhu and Adi Parashakti, who is said to be an unmanifested Brahmanda. With this form and out of sacred energies emerged Lord Maha Kameswara and Lalitha Tripura Sundari, to restore dharma, also restored all that was lost due to the atrocities of demon king, restored the entire universe once again after destroying the demon Bandhasura. Lalitha Tripura Sundari was also responsible for creating Lord Brahma, Goddess Saraswathi, Lord Vishnu, Goddess Lakshmi, Lord Shiva, Goddess Parvati and later the demi-gods and devas were added. Lord Vishnu incarnated as brother of Goddess Parvati.

Lalitopakyana: Goddess Lalitha Sahasranama of Lalitopakyana is scripted in the 36th chapter of Brahmanda Purana, which discusses about the celestial conversation between Lord Hayagriva and Sage Agasthya. The script Lalitopakyana was originally drafted by eight goddesses of speech, who later under the supervision of Goddesses herself, presented to the world in the form of an instruction to the devotees through the cosmic energy of Lord Hayagriva and Sage Agasthya.

Beauty of Three Cities: Goddess Lalitha Tripura Sundari is revered as Shodashi, also known by other sacred names as Lalitha, Kameswari, Sri Vidhya and Raja Rajeshwari. First, shodashi refers to beauty of three cities. Goddess Lalitha Tripura Sundari has unique meaning of her names to understand the powers of Goddesses. As Lalitha, it refers to her graceful presence. As Tripura, she is beyond the three qualities, namely senses, judgmental, impressions or it can be better understood that she can never be disturbed or distracted, see can never be egoistic or never be discriminative. Also, she is a combined power of Lord Brahma, Lord Vishnu and Lord Shiva and as Sundari, “She looks gorgeous and beautiful looking, in all the three worlds”.

She resides in the heart of everyone: Goddess Lalitha Tripura Sundari bestows fruits and results for their acts in accordance with their deeds and karmas. Whatever erupts in the universe is the outcome of her deeds and no one can stop her activities and disposes of freely, based on her will. She incarnated the forms of Shaktis beginning with the auspicious name Tripura. She is Goddess Mahalakshmi, goddess of wealth. She created three great devas and three great shaktis, one being Goddess Ambika and Lord Purushottamma, two being Goddess ‘Sri’ Goddess of Wealth and Lord Brahma and the third being Goddess of Speech Goddess Saraswathi and Lord Shiva, designating the duties and responsibilities of creations, sustenance, dissolution and re-birth.

Shodashi, a girl of sixteen: Born from the eastern face of Brahma with 16 petals of wealth, enhancing intellectuality, knowledge and emotional aspects of the three worlds "Akash" the sky, "Paatal" the underworld and Dharti the earth. She is a great divine mother of creative powers, rules all that is perfect, complete and beautifies. The 16 petals of wealth are to strengthen power over mind, ego or self-esteem, sound or state of being in good condition, touch or feel, sight or vision, taste or flavor, smell or odor, intelligent, steady or firm, memory or mind storage, name or fame, growth or development, etheric or subtle body, reviving or self-consciousness, physical body or body senses. 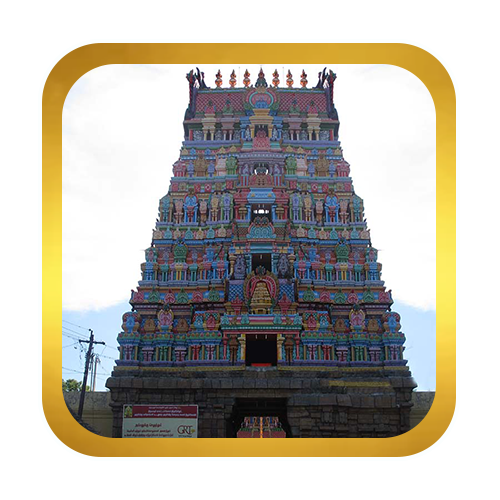 In this temple Goddess Lalitha is Swayambu and grace of Goddess in the form of Goddess Amman is very auspicious who is adorned with jewels, looks with splendor as a married woman with her consort Lord Shiva in the form of Lord Meganathaswami is also a swayambu murthi has been praised by Sage Gnansamabandar in his scripture Thevaram hymns. Lord Shiva in this temple as Lord Meganathasawami showing his appearance in Gajabrushta Vimana has a legacy saying rear side of elephant with three Kalasas, which is in conformity with Agamas, represents Godhead of the Sthala. Goddess Lalitha is seated on Shri Chakra Raja Simhasan throne with her merciful protection holding Abhaya Mudra, Varada Mudra for protection and boon for early marriage and child for childless couples. Lord Garuda was born in this place. Aruna the charioteer of Lord Sun, Lord Vali, Lord Sugriva, Lord Yama and Lord Shani has been the auspicious birth place. It is very auspicious temple worshiping for longevity, Mrityunjaya, cure disease, bestowed with graceful look, prosperity, relief from curse, blessing for child bearing, wealth, good health, attain the path to Moksha. 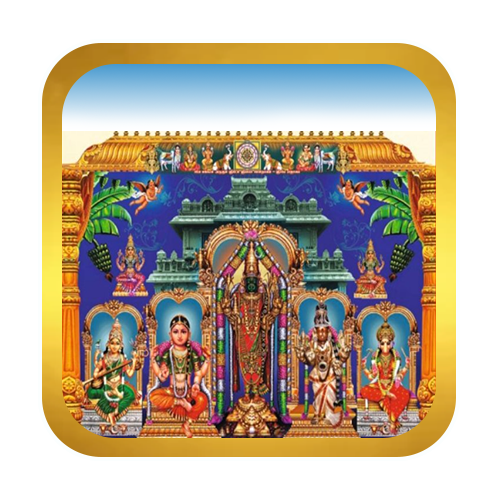 Goddess Lalitha Maha Tripura Sundari auspicious peeth is Sreepeedam which is said to be unparallel, unmatched throne of Goddess Lalitha, protects and blesses all one who seeks her blessings. In this temple the Lord Shiva is in the form of Lord Sadhasivar. Her Goddess Lalitha sits on the left lap of Lord Sadhasiva and perform her duties and auspicious leela in this temple. At the throne of Sreepeedam, Goddess Shakti in the form of Goddess Lalitha resembles in three forms. One as Sree Bala as a baby girl, Sree Taruni an young lady, Sree Lalith Tripura Sundari, the divine mother goddess and Sri Chakra was consecrated to reduce her aggressiveness, ferociousness, to remain calm and peaceful. She is depicted in Vishwaroopa form with ankusham, pasham. In her fore arms holds Pancha Baanam resembles as Goddess Varahi and holding her rare arms, a sugarcane as Goddess Matangi, who is connected to thithinitya Devis blesses devotees with Ashta Shakti's power, eradicate poverty, bad spirits, emptiness, bless peace, divinity, bestow all life desires, good health, cure disease, beneficent rain, grant boon, treasure, wealth, attain the path of salvation. 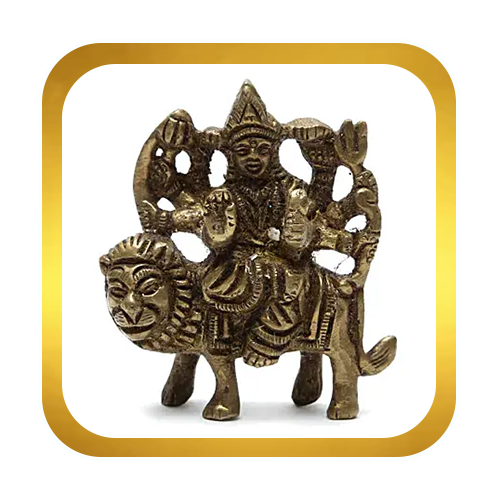