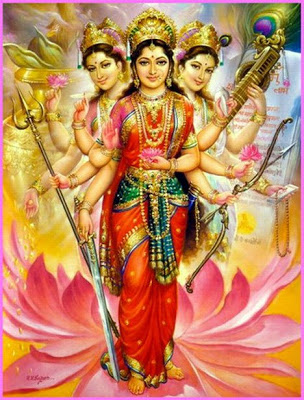 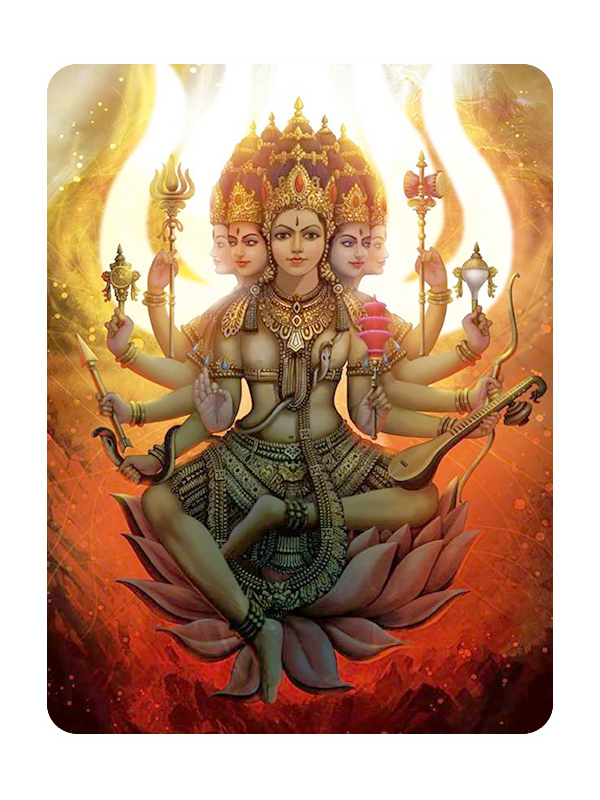 Chanting the Sahasranamas 1008 Names of Goddess Gayatri and worshiping on this day is praying the trinities seeking the blessings of three mother goddesses in the form of Goddess Gayatri who is depicting in a sitting posture in a lotus as Panchamukhi Gayatri, an energy of five faces, a depiction of high-level meditation. The ten arms showing unique energy signs and need for worship of Pancha Pranaas, energy of five forms, Pancha Tattvas energy of five elements, the Panchabhuta and ten unique energies holding various energy weapons, blesses all with strong and stable desire to lead the life of existence, good health, strong personality, long life, intelligence, stunning self-confidence winning over competition, attain success in various fields, being humble, remove fearfulness, frustration, disgusted, anguish, being neglected, lack of passion, no growth and remains unconnected with zeal, enthusiasm, clear all depressions, degradation bestow thoughtfulness, wisdom, ability, motivation, succeeding in cash flow, income and gains, wealth multiplication, abundance, prosperity.

The word “Makara” denotes the zodiac sign “Capricorn”. The Planet Sun moves into Makara Rashi or the zodiac sign “Capricorn”, is called auspicious “Makara Sankranthi”. Lord Sun is said to be a cruel planet and said to be the soul of “Kala Parush”. Lord Sun is also called as “Energy of Prathyaksha Saakshi” who drives instant evidence in the skies is pervasive and omniscient, who lead the existence of universe with highly intelligence, powerful energy with high magnitude, prominent, energy of vision, sensing, recognition, identification which shines on daily basis, every day and those who worship on him on this day is blessed with honesty, ingenuousness, reality, handful substance, candor, sincere, transparent in dealings and ventures, truthful, existence of wishful thinking, faith, belief and entity.


Makara Sankranthi is the day Goddess Lakshmi has appeared from Samudra Mandan during the churning of milky ocean and Lord Vishnu is her consort is the day of harvest of crops is day of thank giving to nature the Lord Surya, the Sun, has immense significance, where the malefic effects of Sun and Saturn is washed away during this Homam and chanting 1008 Names of Goddess Gayatri, removing Doshas of Lord Sun and Lord Saturn for success, prosperity, clearing all obstacles and miseries, bless all with fortune and wealth, valuable gold, jewels, ornaments, cure ailments, medicinal properties, wish-granting desires, immortality, prosperity with abundance and path to salvation.

Veda Mata: Goddess Gayatri is a feminine cosmic form of Gayatra. The word ‘Gai’ denotes to sing. The song contains Gayatri Mantra protects the Prana, the vital breath of life existence. The root of Gayatri is from two traditional understanding, one is ‘gai’ and another is ‘trai’. Here trai can be denoted as protection to Sadhakas. So, ‘gai’ is singing and ‘trai’ is protecting. The word Gayatri was originated from the sacred word Gayatra.

Image Appearance: Goddess Gayatri is a Kumari, the Virgin, the lotus three eyed cosmic energy of red in color, on a swan, seated on a lotus, who looks bright, decorated with gems and ornaments of red and attracted colors, her neck holding garland of red flowers, symbolize purity, charismatic beauty, peace and silence, love with passion. She is holding on her ten hands weapons which indicates knowledge of warfare is a sacred divine protection from enemies, evil spirits, who works unethically against her devotees. She also emits signs that she is ready to bless desired boons, those seeking her blessings.

Elements of Heavenly Knowledge: The 24 letter Gayatri Mantra a Vedic hymn, is a spiritual knowledge for life existence, a root mantra in a seed form for austerity and also act as a best foundation in spiritual practices in chanting this sacred mantra for curbing the degeneration, instantly emerging out delayed consciousness, to pledge and vow for growth, making you vigorous, intelligent, brilliant.

Lord Sun, God of Knowledge: Sacred Gayatri Mantra is a supreme power dedicated to Lord Sun who is also called as Lord of Knowledge is said to be the only source of energy in the form of divine light on earth who is visible and inspirable energy to worship, devote and seek blessings to gain knowledge, lead a path of righteousness, invokes positive energy levels to live a successful life, enrich mind to connect with the living consciousness, establish deep sense of thinking, sense of feeling, performing divine full deeds, accomplishing our goals, achievement in life under divine faith.

Gayatri Mantra personifies as Goddess: Gayatri by itself is not a name of any Goddess but over a period of time personified as Goddess Gayatri. Gayatri Mantra itself is so powerful energy has created its own image in the form of Goddess Shakti, is called as Gayatri Mata depicts with a face, with two arms invokes an energy in the form of superpower, a statue of humanity and by mantra power emits immense spirituality to present it to the human worship to enlighten knowledge and action, presents herself as mother of world as Goddess of Vedas who is deeply revered and honored as Veda Mata.

According to Pingal Shastra and Mantrartha Chandrodaya supports the basic grammatical requirements of Gayatri Mantra and as per Vedic scriptures the letters in the Mantra are arranged and counted, are as follows: 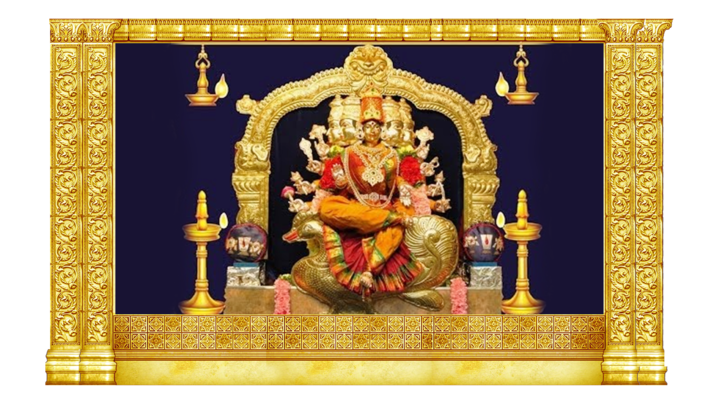 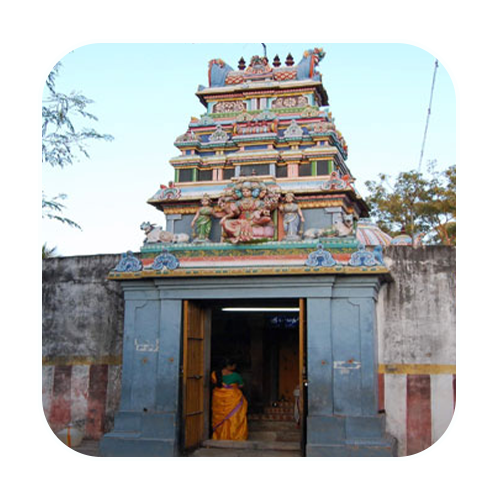 In this Temple the thirumoola deity is Goddess Gayatri, who is seated on a beautiful lotus flower, symbolize wealth, depicted in five unique faces with facial expressions with ten arms holding weapons, in the form of Goddess Ambal. The Five faces show five demi-gods of humanity and its existence are combined together, to fulfill the goals of the aspirants. The five demi-gods are depicted in the form of Lord of Space is Lord Vishnu, Goddess of Fire is Goddess Maheswari, Lord of wind is Lord Sun, Lord of Earth is Lord Shiva, Lord of water is Lord Ganesha. These five demi-gods are vital force and the above lords manifest kundalini shakti which are divine serpent power with five radiation of consciousness, blesses all with intelligence, mind power, will-power, illumination, divine grace, remove all sins, ignorance, improves concentration, healthy breathing and functioning of nervous system in order, calms mind, reduce depression, high glowing skin, development and prosperity, successful marriage, remove fear, cure disease, enrich happiness, good health, wealth, prosperity. 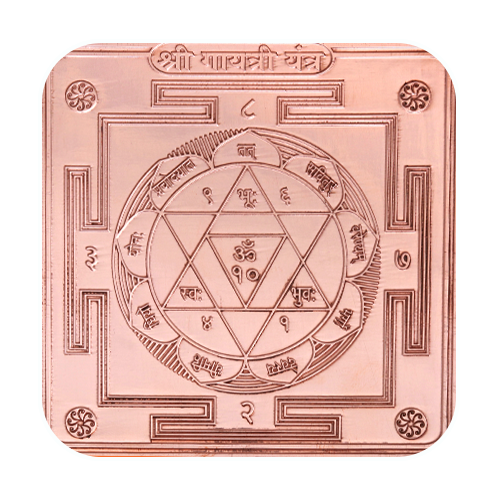 It opens the eye of the aspirants, enlightens mind with spiritual insight, connected to Lord Sun worship, Yoga and worship of Goddess Gayatri. Gayatri Mantra is highly revered sacred Vedic mantra, is revealed to Brahmarishis, who is none other than the Brahmarishi Vishvamitra, invokes the powers of Devas and often called as Mantra of Savitri. Gayatri Mantra mediate upon eternal spiritual light which in turn illuminates power of knowledge and intelligence blesses all with good health, happy hormones, feel delighted, peaceful and sound, being positive, calms your mind with divinity, vibrating positive energy, make your surrounding blissful, removes stress and depression from mind, steer your life with happiness, making you brains, eyes and other sense organs to function well, attaining spiritual maturity, develop your personality, career, grants you good income, wealth, prosperity.