Aadi Amavasya - A New Moon That Fetches Blessings of Ancestors

Amavasya or New Moon day is the last day of the moon when it is in its waning phase and is invisible to the human eye. Aadi is the name of a month in Tamil that begins on a date in mid July and ends mid August. It is said that during Aadi amavasya the Sun moves towards the South called Dakshinayana. This is the first new moon day during this time and therefore very powerful and auspicious.

In Vedic literature, Manusmriti says that of the five important rites that ought to be performed by a householder, Pitru Yagna or worship of ancestors is one of the most important duties. Garuda Purana says that Shraddha is so significant in one’s life that those who fail to carry out this for their pitrus could witness downfall. The ancient text also mentions that Pitrus live in Pitru loka or Soma loka which is near the Moon. Pitru Tarpanam is performed by a person who has lost his father.

Why Pitru Tarpanam is Important for You

Get Trouble-Free Life By Doing Tarpanam On Aadi Amavasya

On the day of Amavasya, offerings of sesame seeds and water makes ancestors happy and they bless their descendants with a prosperous life and ensure their well-being. These oblations are offered to three generations of ancestors both from the maternal and paternal side. The deities for pitrus are Vasu, Rudra and Aditya and invoking them by chanting mantras so that food reaches the ancestors. The deities transport the food called ‘swadha’ to pitrus which is accepted with great satisfaction and pride. But why should we worship them even after they have left us? Well, we may find ourselves in very difficult and trying situations that cause a great deal of misery. This is because of bad karmic effects that our ancestors have given us by way of soul genes. To put an end to all the chaos in our lives, we should respect and pay our tributes to ancestors through tarpanams and shraddhas.

Tarpanam at Marundeeswarar Temple Is Auspicious For Pitru Blessings 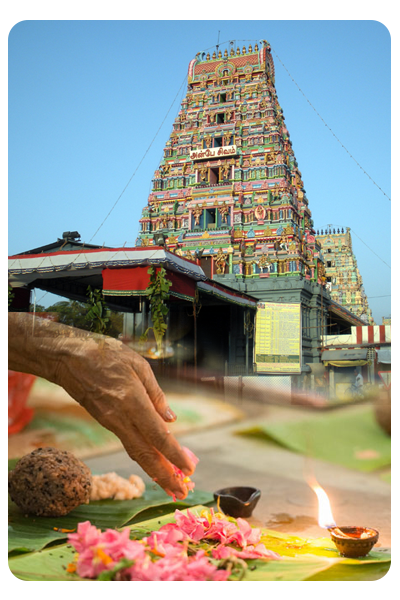 The temple located in Tiruvanmiyur, Chennai is about 2000 years old. The main deity Lord Marundeeswar or god of medicines is called so because he taught the great sage Agastya about some miracle cures. From that day, the temple is popular for therapy as it is said that if one prays to the lord here he/she is sure to find a cure to diseases and ailments. It is said that the revered sage Valmiki who wrote the Ramayana visited the temple once. Hence the place was called Thiruvalmikiyur and later came to be known as Thiruvanmiyur. Of late, the temple has become famous for performing Tarpanam to pitrus on special occasions like Aadi Amavasya.An area around the temple tank is allotted for the purpose and experienced priests are assigned the job of performing the same.

Feeding cows with bunches of Spinach relieve you from Pitru Dosha, eliminates all the sins that you committed unknowingly, bring welfare of the entire family and generations.

Vedicfolks has made arrangements for Tarpanam on Aadi Amavasya. Order now and satisfy your ancestors by liberating them (Moksha) which makes them happy. You in turn will get their blessings for a lifetime!

IF you want Amavasya Tarpanam subscription Packages(Semi and Annual), Please use the given link